Digging deep: What are they doing down there? 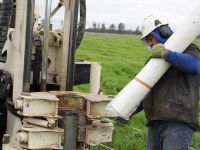 David Whitehead is famously unflappable, but the senior Landcare Research scientist was barely able to contain his excitement for most of early May.

David was at the helm of a team of about 10 Landcare Research staff who performed the herculean task of gathering and processing about 50 soil core samples from Lincoln University’s research farm, Ashley Dene.

The size of the samples accounted for much of the excitement, including David's. The logistical feat was made possible with the help of a 10 tonne drilling rig operated by McMillan Drilling group, who designed a custom-made drilling head to plunge sterilised PVC pipes into the farm’s extremely stony soils to a depth of 1.7m. Each extracted core weighed about 100kg.

Research technician Graeme Rogers dreamed up the idea of using a drilling rig used for geotechnical work in Christchurch to extract the samples.

Graeme's ingenuity has thus provided a platform to test and research the nitrogen cycle on a new scale.

Landcare Research plant-soil ecologist Gwen Grelet said: "There's been a lot of research on the top 20-30cm of soil because that's where most of the activity and carbon is stored. So to go to these depths, we are in new territory here."

The samples were first sifted by depth, then sent to the lab, where a crew led by molecular technician Carina Davies, sorted root, rhizosphere and soil samples for subsequent DNA sequencing.

The team, including two new PhD students Jonathan Nuñez and Balin Robertson, is hoping to identify particular microbes that regulate the nitrogen cycle at depth, and how deep-rooted plants promote the activities of these microbes.

Their hunch is that in deep-rooted pastures, the fungi and bacteria that do all the hard work during nitrification are far more active at depth than previously thought. "If this is confirmed, then our findings will help us explore options for farmers to improve land management to reduce nitrate leaching and maintain soil carbon", says David.