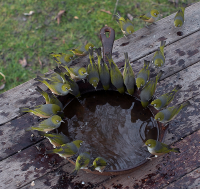 The primary aim of the garden bird survey is to monitor long-term trends in common garden bird populations. The survey has been running for only 7 years, not a long time compared with 35 years that the Big Garden Bird Watch has been running in the UK, but some trends are starting to appear.

Perhaps the most encouraging trends are increases in counts of native tui and fantail. It is too soon to determine whether these increases are part of a longer-term trend or just part of normal fluctuations in numbers over time. Counts of other native species such as silvereye, bellbird, kereru, and grey warbler have not increased over the last 7 years, but have not declined either. Their numbers have fluctuated from year to year, presumably in response to factors such as weather, food supply, predation, and disease. Why tui and fantail have increased but not other species such as bellbird and grey warbler is unclear. Counts in years to come may clarify the situation.