Our history with kauri dieback

Aotearoa’s magnificent kauri tree was almost wiped out in the early 1900s due to settler deforestation, and now the giants of our forests face a new threat – kauri dieback.

A healthy kauri tree can grow up to 50 metres tall and live for over 1,000 years. In the last 10 years, however, kauri dieback has spread quickly, wiping out thousands of kauri, especially in the Cascades Ranges (Waitakere Regional Park).

For over a decade, Manaaki Whenua scientists have played a key role researching kauri dieback and establishing how it works and its causal organism. The disease was first spotted in 1972 on Great Barrier Island, and then on the mainland in Northland’s Trounson Kauri Park in 2006. Manaaki Whenua scientists identified it as a new species in 2015 and gave it a new name – Phytophthora agathidicida – the kauri-killing Phytophthora.

This identification was critical to helping scientists understand the ecology of the disease and how to diagnose and manage it – but there is still a long road ahead. Scientists needed to develop a solution for the problem so the research team, in collaboration with partners Scion, Plant & Food Research and Auckland University, decided to adopt a holistic mātauranga Māori worldview.

They say the solution to saving the vital taonga of our indigenous forests will lie in embracing the whakataukī ‘mahi ngātahi’ – resilience through collaboration-approach.

The research team, in collaboration with Māori partners, then began looking at root-inhabiting fungi and microbes associated with healthy kauri to see if they could help develop an inner resilience in the sick trees through the remedial amendment of post-biotics.

Through DNA technology, Manaaki Whenua scientists pioneered fast and accurate methods of detecting the disease – finding it can be spread in just one teaspoon of soil, and can produce long-lived survival structures in the roots of diseased kauri.

They also found kauri trees have a uniquely sensitive root environment. While animals were discovered to play a part in spreading the disease, scientists found the biggest culprits are people who do not clean their shoes and equipment before entering and leaving kauri forests. In response, they have set up chemical cleaning stations, and instututed a cultural ‘rahui’ to contain the inoculum and protect healthy forest from accidental introductions. 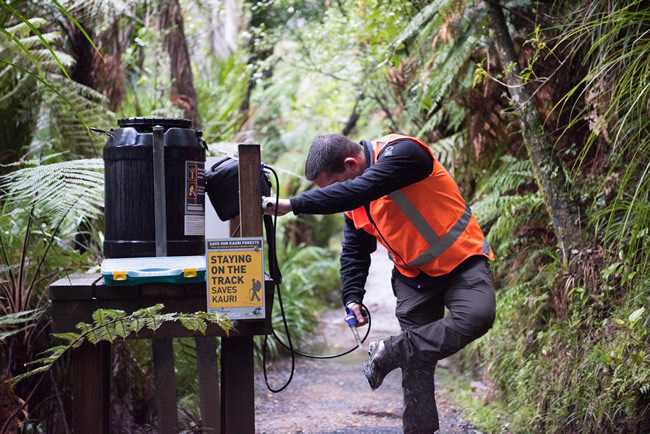 Although the major threat posed by kauri dieback disease is still as real as ever, researchers aren’t giving up on finding a cure. Phosphite trunk injections have been shown to be able to control the disease in individual trees.

However, defeating kauri dieback will need widespread community involvement to translate scientific findings into actions and increase awareness of risks.

Manaaki Whenua has forged partnerships with Ark in the Park (an eco-restoration project in the Cascades Kauri Park), and Rongomai Primary and Mercury Bay schools and students have already helped design devices containing kauri leaves to set in streams. After two weeks, the leaves are sent to Manaaki Whenua where any organisms collected can be isolated.

In an attempt to better understand the disease’s origins and evolution, Manaaki Whenua researchers are now broadening their research to overseas.

The project is funded by MBIE’s Prosperity From Trees: Protection from Current and Future Disease Programme with support from the Tangata Whenua Roopua, and 15 Mana Whenua Associations. Additional investment has been provided through Unlocking Curious Minds, the Royal Society of New Zealand, the Kauri Dieback Management Programme, Ministry of Primary Industries, and Manaaki Whenua Capabity Funding.