The wasp season is finally winding down and I am now able to start catching my breath and let you know what has been going on with the Wasp Biocontrol Phase II project. 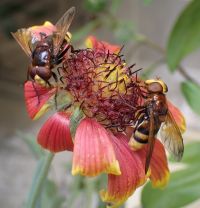 Last year we brought back from the UK well over 1,000 Sphecophaga vesparum pupae, around 800 Volucella zonaria larvae, 50 Volucella inanis larvae, 40, or so, adult Metoecus paradoxus beetles and two Leopoldius spp pupae. The plan for this season was to rear them all up in order to do the host suitability trials on wasps, bumblebees and honeybees. As we found out last year, getting species collected from the northern hemisphere to synchronise with the opposite season in the southern hemisphere is difficult. This year I experimented with various temperature and light regimes to see if we can increase the successful number of overwintered individuals. This year proved to be very challenging in terms of rearing these agents through the winter. The only species to have any emergence this year was Volucella zonaria (Figure 1.). Of the approximately 800 larvae, only a small fraction survived the overwintering to pupate. None of the Volucella inanis survived the overwintering process and the Metoecus eggs that were found last year turned out not to be viable. And so far, none of the UK Sphecophaga have emerged this year.

So, my choice of test agent was made for me. I was to be investigating Volucella zonaria this season. The first stage of this was going to be getting the adults to mate so that I could use the females in a host selection test. Easy! I thought if I was able to get wasps to mate in artificial conditions, hoverflies would be a cinch. After searching the literature on hoverflies I found very little on their mating behaviour and of the few species I could find information on it was stated that the flies from this family need a lot of space and a lot of sunlight. So I tried increasing the light intensity, changing the light temperature (buying expensive daylight-balanced LEDs), moving the cages to a glass-roofed rearing room and even resorted to trying hand-pairing. Nothing worked to get them in the mood. Since these flies are still under strict containment, allowing the adults to free-fly in one of MWLR’s large glasshouses or field cages was out of the question. So this means the host testing will now have to be done in the UK during the upcoming trip in August – September using wild caught adults and larvae. It has been a difficult season indeed.

On positive note, I have learned a lot about the biology of the Volucella hoverflies this year. I’m really looking forward to getting stuck in to the host testing in the UK. The planning has already started and I’ve been coordinating with a few bumblebee and honeybee experts so I can draw on their experience on handling/rearing these bees specifically for laboratory research.

This year I decided to go about the NZ nest survey a little differently than in the past. One group was sent to get some numbers on the prevalence of Sphecophaga vesparum from two areas known to still have Sphecophaga populations as recently as 2016. The other group was to survey nests for any associated organisms, particularly anything that may be of potential interest as biological control agents (diseases, fungi, mites, or other arthropods).

For the associated organisms survey we collected 26 nests from the Canterbury region (Figure 2., Table 1.). We found low levels of Pneumolaelaps mite infestations in roughly half of the nests. Surprisingly, only one nest was found to be small and ‘sickly’. Since this nest was collected in a group of six, all of which within 200m of each other, we have a good baseline for comparison. Several samples were made from the ill nest along with samples from the nearest healthy nest and stored in the -80 C freezer for analysis by Phil Lester’s group at Victoria University. All of the other nests surveyed appeared healthy, normal and otherwise un-interesting!

The Sphecophaga survey looked at a total of 90 nests, 48 from the View Hill area near Oxford, Canterbury (Figure 2.) and 42 nests from the Pelorus River area upstream of the Pelorus River Bridge (Figure 3.) in Marlborough. There were no Sphecophaga found in the nests from View Hill this season despite finding a nest highly infested from the same area in 2016. Of the 42 nests surveyed in the Pelorus area, two nests had low level infestations of Sphecophaga. The Pelorus Bridge area was one of the first locations for the release and establishment of Sphecophaga but has been the site of intensive poison baiting over the past several years. It was reassuring that there were any Sphecophaga recovered there at all. There were some other interesting fungi and bacteria from these nests as well, and samples are being held in the -80 C freezer until we can have them analysed. At first glance, one of the fungi appears to be similar to the type that causes chalk-brood in honeybees since the symptoms look the same to me. We should know more in the next few weeks. 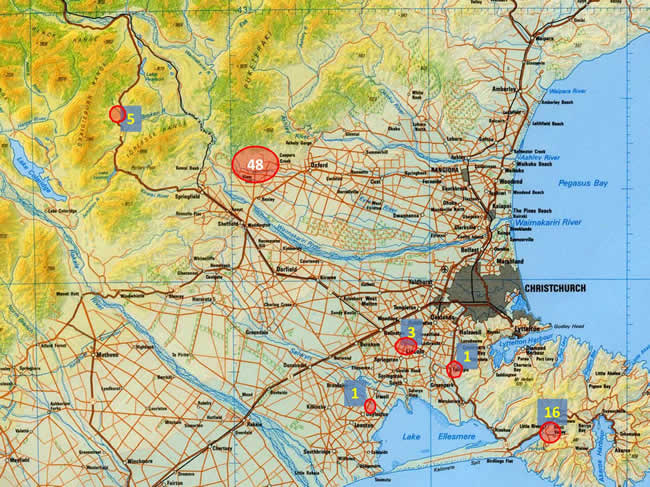 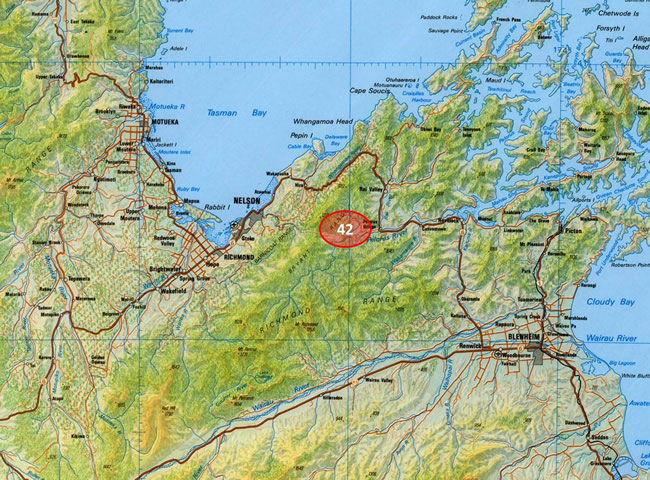