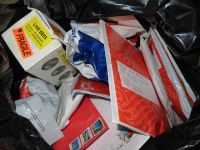 Normal day in the office – a delivery of wasps sent to Bob by members of the public – THANK YOU!

Recently our project went through a Stop/Go assessment, and I am pleased to report that MPI approved the Committee’s recommendation that the project should continue.

The main issue we had to grapple with was that in the original application we put down that mastering or failing to mass rear the mite in captivity will be a make-or-break point for the project, and so far we have not mastered this mass rearing aspect.

Why did we put this limitation in the first place, and how did we get around this problem?

Looking back to the time we applied for this piece of research to be funded, we knew almost nothing about the mite and the study we proposed was high-risk. We only had records of the mite from the Canterbury region, and we believed that in order to be able to conduct any studies on mite life cycle, the effect it may have on wasps, and aspects of safety to non-target organisms – we would require high numbers of mites, and to achieve those, we needed to learn how to generate such numbers ourselves.

In addition, we envisaged that surveys of wasp nests in the wild will be conducted such that nests will be dug up, frozen, and examined for mite presence once dead.

Fast forward a year and a bit, we now know that:

The advantages are two-fold:

Consequently, while we have thus far failed to mass rear the mite, we were able to demonstrate that mass rearing was a means to an end and not an end in its own right: We thought we would need to mass rear in order to get the numbers, but we are able to get the numbers in other ways we could not have predicted at the outset. The rearing failure should not affect our ability to deliver on the original main goals of the project. That’s science for you!

A huge THANK YOU to all who sent wasp queens throughout winter! Bob has by now received around 400 queens from 14 regions – from as far north as Northland (5 wasps, 1 had mites) to as far south as Southland (10 wasps, 7 had mites). Both wasp species were represented in the samples and from the material examined to date every region represented in the samples had mites! As far as the split between species: roughly 50% of German and about 30% of common wasp queens had at least one mite on.

When it comes to checking live nests, it gets tricky: we now know that nests with mites are smaller than nests without mites (see Update 3). The differences are even more magnificent than what we reported previously. This size difference and reduced wasp aggressiveness associated with mite infestation reveals a sting in the tail: small, less aggressive nests are less likely to be detected, and could therefore be under-represented in the sample. So the effect may be still greater than what we are able to detect.

How can we overcome this sampling bias?

One obvious way would be to randomly ‘draw’ areas to survey, and sample each such region at a pre-determined grid. Cold fact is that we do not have the resources to perform such a survey. Another way would require public assistance once more: this time of year, as queens start new nests, it would be good to start locating such new nests and mark their location with a clear physical marker.

Later, in autumn, when Bob conducts the live nest digging survey, it would be extremely useful for him to come back to such locations and discover if the nest survived and grew, or has collapsed, and whether mites are associated. Collapsed nests marked from earlier in the season would not likely be detected otherwise! This year we are particularly interested in surveying nests around Wellington, Canterbury and Otago. If you can assist by finding and physically marking early nests in these regions, please let us know! Make sure these nests are no-where near dwellings though…

We have collected some circumstantial evidence to suggest the relationship between the mite and wasps is damaging to wasps, but we have not yet been able to hit the nail on the head and demonstrate beyond doubt that this is indeed the case. One new trick we are trying is the use of molecular tools to look for wasp DNA inside the guts of mites. DNA material from mite samples has now been extracted, and we are waiting for the molecular scientists to tell us what they are finding. More on this when we have the answers – watch this space!

Finally, if you missed the wasp biocontrol item on Radio NZ National or want to listen again go to the Country Life page (aired September 18th).