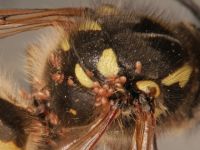 Several of the newly-named mite, Pneumolaelaps niutirani, on a wasp

It has taken a long time and a lot of work to describe the new mite and compare to other closely related species. The description was published in the scientific literature last week, so now it is official – our mite finally has a name! The specific name of Pneumolaelaps niutirani is derived from Māori words for New Zealand, Niu Tirani, so the name is a reference for the locality from where the mite was found for the first time.

The description paper goes on to compare the diagnostic features of the new species with three other closely related species, two of which are present in New Zealand (they are of European origin).

There is not a lot the paper can tell us about the biology of the mite, because all that is known has been discovered by Bob! The authors do, however, put Bob’s observations in context of what is known about other species in the genus, the close relatives:

What’s coming up in the project?

We are gearing up for a busy season! Bob started noticing wasp workers flying out and about, which means that early nests are now established, and we could use your help! This year we would like to survey nests in Canterbury, Otago and Greater Wellington. If you are from these regions and would like to help, we ask that you start keeping an eye open to detect early nests and mark them with some physical marking for excavation later in the season. Some of these nests will collapse later on, and will be difficult to locate in the absence of physical marking, and these would be the nests we are most interested in! Nests that were surveyed last year in Canterbury and Nelson/Tasman showed a clear difference in size, with mite-infested nests being much smaller and less aggressive in comparison to nests without mites. We suspect the difference is even greater, but our sampling was biased towards detectable nests, which are active around the time of sampling, later in the wasp season. That is why we are so keen for early nests to be marked, so their fate can be followed even if they collapse by the time Bob comes to excavate them. If you are keen to help, please contact Bob.

We are also preparing for the first season of safety testing, to ensure the mite is not posing risk to honeybees and bumblebees. Testing protocols are being refined, test organisms are being sourced, and test will begin as soon as we start getting mites from the field.

In addition, we are still working on trying to find out what is the nature of the relationship between the mite and the wasps. So, there’s a bit to keep Bob busy…