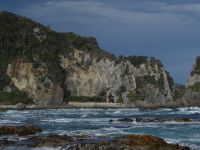 Coastal cliffs are very steep rock faces near the sea that are greater than 5 m in height. They may ascend in steps and have ledges, crevices and overhangs. Coastal cliffs may rise directly from the sea or be separated from it by a narrow shore. Acidic rocks are primarily granite and gneiss, hard sandstones (including greywacke, mudstones), and rhyolite. Cliffs and outcrops provide many varied habitats: from bare rock colonised only by mosses and lichens to deeper soils supporting woody vegetation; from highly exposed situations to heavily shaded and sheltered habitats; and from very dry to permanently wet surfaces. Coastal cliffs are influenced by salt spray, particularly near their bases, and halophytes (salt-tolerant plants) often characterise these habitats. Some widespread native species include New Zealand ice plant (Disphyma australe), small-leaved pohuehue (Muehlenbeckia complexa), silver tussock (Poa cita), New Zealand spinach (Tetragonia implexicoma) and taupata (Coprosma repens). More stable cliffs support pohutukawa (Metrosideros excelsa) treelands such as in Northland, Coromandel and parts of the Bay of Plenty. Floristic richness increases in seepages. Native species that have been lost from neighbouring habitats may find refuge on coastal cliffs.

On the North Island, acidic coastal cliffs occur on rhyolite of the Auckland to Coromandel coast and islands, and on interbedded sandstone and mudstone on the east coast of Northland and parts of the Taranaki and Bay of Plenty coastlines. Cretaceous sandstones and conglomerates occur in the northern South island at the Cape Farewell coast, and on greywacke on the southern coast of the North Island at Cape Turakirae. They are more widespread on the South Island, occurring on gneiss along the NW Nelson coast, non-calcareous breccias, sandstones and mudstones of Otago and Southland (including the Catlins coast), and Fiordland, and granites, and other intrusives of Southland and Fiordland. They also occur on Little Barrier Island (rhyolite), and Stephens Island (greywacke) and Stewart Island (granite).

Spotted shags (Stictocarbo punctatus) nest on cliff ledges in Marlborough. Formally these sites would once have had large colonies of sea birds such as petrels.

Erosion is one of the main threats (although it is a natural process) however, coastal cliffs on hard rocks like granite or gneiss are less frequently undermined by the sea than cliffs composed of softer and more incoherent sandstone or mudstone. Landslides resulting from marine erosion are even more frequent where the rocks are unconsolidated, such as shattered greywacke. The greater openness of cliffs increases susceptibility to weed invasion. There may be some grazing at the tops of sea cliffs. Near urban centres, coastal cliff tops also are desirable locations for dwellings, and rubbish dumping often results.