Insect pests and diseases of harakeke

Yellow-leaf is the most serious disease of harake and various fungal infections (moulds and spots) can affect the appearance of harakeke leaves. Harakeke is home to two native moths as well as mealy bugs and scale insects.

The windower and the notcher

Harakeke is home to two native moths that are a great nuisance to weavers. The caterpillar of one, the ‘looper’ or ‘windower’, chews narrow strips on the underside of the leaves, exposing the fibre, which soon decays. The other caterpillar chews notches on the side of the leaves.

Both caterpillars are sensitive to light. They eat at night and shelter during the day in rolled up dead leaves and dry debris. They cannot withstand prolonged immersion in water. Harakeke grew naturally along rivers and in wetlands, and when flooding occurred, great numbers of pests were destroyed.

It’s not easy to control these pests. Insecticides that kill caterpillars can be used, combined with a sticking agent to make sure the spray sticks to the leaves. Spray needs to cover the leaves very thoroughly and penetrate the leaf bases. Sprays are best applied in December and May. Your local plant nursery can advise on suitable products.

Sprays are not always a practical or desirable option. The best preventative measure is to keep the ground clear of hiding places by getting rid of dead leaf tubes and other debris, and keep the bushes well trimmed and opened up to the light. Encourage bird life too. 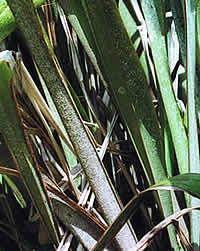 Mealy bugs are commonly found where the leaves sheath together at the bottom of the fan and on the rhizome. Often they are living amongst masses of whitish-grey powder. Generally, they do not affect the health of the plant, but if an infestation is bad enough, the harakeke leaves develop a red discolouration.

Scale insects form crusty, white, woolly looking patches on the underside of the leaves, especially where the leaves are shaded. The insects suck the sap, discolouring and weakening the leaves, which are then more susceptible to disease. Large infestations can be very damaging to the health of the bush.

Scale can be effectively controlled with oil sprays, available from any plant nursery. Severely affected leaves should be removed.

Various fungal infections (moulds and spots) can affect the appearance of harakeke leaves. Some weavers like the effect of pinkish red patches on woven articles. However, fibre is discoloured, weakened and broken by these infections. Remove and burn badly diseased leaves.

As with scale, sheltered plants and those growing closely together are most prone to attack.

Yellow-leaf is the most serious disease of harakeke, and is caused by a phytoplasma, a specialised bacterium, transmitted by the native flax plant hopper, Oliarus atkinsoni. It occurs mainly in the North Island, and is unlikely to be found below the north of the South Island.

Yellow-leaf disease is characterised by abnormal yellowing of the leaves, stunted growth and premature flowering. The rhizome rots, and leaves collapse.  In a normal healthy fan, one or two outer leaves yellow and die off as they age, but with yellow-leaf disease the dying back is much more pronounced. The affected leaves are actually more orange than yellow. There is a big accumulation of recently dead leaves about the base of the fan.

The disease can take a few months or years to progress and the yellowing is much worse in the period of active growth. As those leaves fall, younger, greener leaves are left, which can give the appearance of recovery.

In a pā harakeke, a bush that is suffering from yellow-leaf should be dug up and burnt, so that it can no longer act as a source of infection.