Can we increase soil carbon to offset methane and nitrous oxide emissions from agriculture? 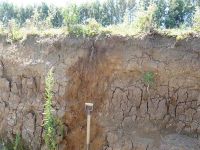 The ability of Allophanic Soils to stabilise organic matter may be utilised to maintain or even enhance soil C storage.

Concerns are being raised about the possible economic impacts of ratifying the Kyoto, Protocol, especially by the agricultural sector. Two very potent greenhouse gases, methane and nitrous oxide, represent about 55 % of New Zealand's emissions profile, and are sourced mainly from pastoral agriculture. The sensitivity of the agricultural sector to potential negative impacts of ratifying has caused misunderstanding about how the emissions of these gases might be reduced, or even offset altogether.

Some farmers believe that by increasing pasture production, the humus content of soils (and hence the soil carbon content) will increase to outweigh methane or nitrous oxide emissions completely. If true, even small increases in soil carbon over time could strongly impact on our national carbon budget, because nearly half (13.61 million hectares) of usable land in New Zealand is used for livestock farming. However, research being conducted by Landcare Research shows that soil carbon levels in New Zealand's grazing lands are at or near steady state. This research has involved a review of published data from long-term sites, comparison of soil carbon in archived and recent samples from the same sites, and comparison of soil carbon in samples from trial sites differing in management (for further information see Saggar et al., 2001).

To understand this conclusion, it is useful to consider how carbon cycles in soil, and what influences the cycling processes.

Carbon enters the biosphere through photosynthesis and leaves through respiration, principally from the soil. The degree of accumulation or loss of organic carbon in pastures depends on the relationship between carbon inputs to soil from roots and surface litter, and decomposition rates of soil humus. Shifts in this balance between gain and loss of carbon result from a complex interaction of ecosystem processes (climate, soil type, landscape position, land use and soil management). As the rate of carbon input approaches that of decomposition, soil carbon concentration stabilises at a steady state.

If soils under forest or pasture are brought into cultivation there is rapid loss of organic matter during the first few years. This occurs principally because carbon inputs under crops are generally much lower than under grass, and so loss of soil carbon as CO2 to the atmosphere by decomposition becomes the dominant process.

Restoration of soil organic matter, depleted through cultivation of agricultural soils to near their original level, appears to be a realistic opportunity. Improvements of agricultural soils beyond the original level of soil organic matter through soil improvement may also be possible and can help to sequester more carbon. Among the options of restoring soil carbon in cropland soils are: adopting conservation tillage practices and crop residue management; intercropping; growing winter cover crops; green manuring; fallowing; establishing shelter belts and windbreaks; and retiring erodible lands from cultivation. No-tillage management has the potential to sequester carbon. In some cases, soil carbon can be augmented up to 50% due to smaller carbon losses in crops grown under no-tillage than under conventional tillage.

In some countries, therefore, restoration of agricultural lands degraded from overuse can help to achieve carbon storage. For example, United States cropland has an overall potential for carbon sequestration that represents approximately 7-19% of total US emissions. But nationally, the scope for sequestering carbon in New Zealand cropping soils is negligible, because of the small area covered (0.21 million hectares) and the commonly practised pastoral-cropping rotation.

What should also be kept in mind are the additional requirements of fertilisers and fossil energy to achieve such soil carbon sequestration, and increased nitrous oxide emissions from nitrogen-enriched soils. Secondly, this carbon sink option is of limited duration because any subsequent poorer soil management may as well cause another significant drop.

Where no major disturbances such as soil erosion occur, pastoral farming impacts on soil organic matter are so slow they are obvious neither to the landowner nor to outside observers. Such changes in soil carbon are likely to be too small to measure. New Zealand has a large reservoir of carbon that can vary widely both spatially and temporally. Soil carbon levels of grazed pastures represent different slope and aspect categories. Research by Landcare Research and others suggests that soil carbon levels under established pastures in New Zealand may have reached a near steady state.

If a farmer starts with unimproved pasture (with low soil fertility), then there may initially be a small increase in soil carbon as the soil is ploughed out of an unfertilised, low-fertility pasture, sown to permanent ryegrass-white clover pasture, and fertiliser is applied. But this situation is not common these days-little unimproved grassland is being broken in for pastoral farming from unimproved land. The baseline for most farmers in dairying, for example, is a high fertility soil, and our research has shown adding fertiliser generally has no detectable effect on soil carbon content. There is some evidence that soil carbon levels can sometimes decline slightly if already fertile pastures receive more fertiliser. Generally, however, research shows that fertiliser addition not only produces more pasture and adds more carbon to the soil, but also enhances soil carbon decomposition. The net result of fertiliser application is that only the quality of soil humus is improved without any quantitative increase in soil carbon.

The development of agriculture in New Zealand differed from most other countries: forest clearing after Polynesian and European arrival resulted mainly in pastoral farming rather than arable cropping. New Zealand soils already had high carbon contents under forest, and the introduction of pastures tended to increase mineral soil carbon, so that opportunities for sequestering more carbon in pasture soils are very limited. New Zealand soils already have higher soil carbon levels than the world average. This historic build up in soil carbon is partly due to the predominance of pastoral use, which conserved and even increased carbon, and partly due to the relatively slow decomposition of the soil carbon stored during millennia under forest.

At the national level, our pastoral systems are therefore unlikely to sequester more carbon into soils, and the scope for cropping soils is also negligible. Hence oppotunities for increasing soil carbon stocks, at the national level, through changes in land use and land management are small.