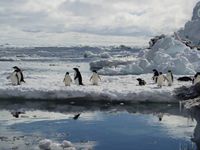 We are using Adélies to test a number of theories on population control in seabirds and to understand the factors that regulate breeding in Adélie penguins. We also study Adélies to understand what they can tell us about the health of the Antarctic marine ecosystem.

Adelies are good indicator of change because:

They are the easiest Antarctic predator to census because they: