Fungi of the South Pacific 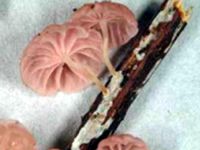 The fungi associated with cultivated plants of the South Pacific region have been extensively surveyed as part of a process to develop biosecurity regulations for the nations of the region. Examples include the plant diseases lists prepared by Joan Dingley, Eric McKenzie and others during the 1980s and 1990s.

In contrast, the fungi of native and weedy, noncultivated plants are poorly known. They have been largely ignored in fungal surveys in the region, and most records are of specimens in highly technical, taxonomic research publications.

In 2005 Peter Johnston visited the Cook Islands specifically to catalogue and photograph the macro-fungi present in the natural forests. The visit was at the invitation of Gerald McCormack of the Cook Islands Natural Heritage Trust, with support through the Cook Island National Biodiversity Strategy and Action Plan.

During two 10 day visits, one in the wet season, the other in the dry season, about 330 specimens were collected. Most were photographed in the field, and tentatively identified at the time of collecting. In 2011 the Landcare Research Capability Fund provided support for some of these specimens to be more definitively named, accessioned into the PDD herbarium, and the data and images associated with the specimens to be added to the NZFungi database.

The identified and photographed specimens, together with the summary reports below, provide a resource for the Cook Islands, and the region as a whole. Many fungi in the Cook Islands will occur in other countries across the Pacific. The information in the reports and the NZFungi database will allow some of the more common macro-fungi of the Pacific to be identified, a first step to having their distribution across the Pacific better understood.

To identification facilitate of the Basidiomycete specimens, a draft checklist of Pacific Island Basidiomycete fungi (excluding rusts and smuts) was prepared. The list is an index of names applied to specimens mentioned in the scientific literature. It provides a starting point to search for reports on the occurrence of a taxon in the region. The list was prepared using bioinformatic tools to query an existing digital repository of 30,000 mycological research papers. The process identified 2,771 names in 537 publications covering 72 countries or territories across the Pacific region. This literature data was supplemented with occurrence data provided by the Global Biodiversity Information Facility.