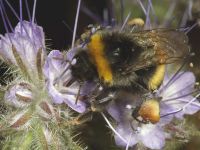 Pollination is the movement of male sex cells (pollen) produced in the anther to the stigma. Pollination can be carried out by wind, or by animals such as birds or insects. This site focuses on pollination by insects, which pollinate many species of flowering plants.

When a pollen grain lands on a stigma of a flower of the same species, it grows a small tube down to the female sex cell (ovule) in the ovary and the genetic information from the male and female parents is combined to make a seed. The whole reason for sexual reproduction is to produce variation that allows the next generation to cope with changes in the environment, so pollination is usually most successful when pollen comes from the flowers of another individual of the same species, and not from the flower that contains the stigma or even from another flower on the same plant.