Seed plants are the familiar green components of wild, modified, and managed landscapes. They provide many of the things that are important to humans and other animal species: timber and paper, shelter, food, drugs, clothing, flowers, and, along with other photosynthetic organisms, they sustain life by converting sunlight into chemical energy and providing atmospheric oxygen. 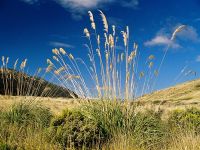 Within the seed plants, two groups are traditionally recognised: