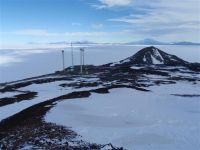 Antarctica is changing with parts of the continent warming as quickly as anywhere else on the planet.

With more people visiting Antarctica for scientific research or tourism the increasing impacts on Antarctica are a concern. There has never been a more important time for policy decisions on the future of Antarctica to be informed by the best science available on the state of Antarctic environments. A major new initiative by Antarctica New Zealand and Landcare Research, the Antarctic Environments Portal, bridges the gap between scientists and decision makers. It will support the protection of the Antarctic environment by bringing science knowledge to the fingertips of policy makers.

A demonstration version of the Antarctic Environments Portal has just been presented at the Antarctic Treaty Consultative Meeting (ATCM) in Brazil. The initiative had an enthusiastic reception by members of the Treaty, who congratulated New Zealand for leading the project.

"I was very proud to hear the extremely positive sentiments from our global Treaty partners first hand when the Environments Portal was demonstrated at the ATCM in Brasilia. New Zealand has long been recognised as a strong advocate for Antarctica. Working alongside Landcare Research to lead this project combines leadership in Antarctic Environmental Policy with research expertise and open accessibility of scientific knowledge."

The 3-year collaborative project between Antarctica New Zealand and Landcare Research with partners from Australia, Belgium, Norway and the Scientific Committee on Antarctic Research (SCAR) has reached its first milestone and is on track to include more functionality before it goes live in 2015. The final version of the portal will include areas for science focussed discussions and an interactive mapping interface that allows users to explore the continent and view geospatial information in the four official languages of the Antarctic Treaty System: English, French, Russian and Spanish.

"Landcare Research has enjoyed working with Antarctica NZ and other kiwi collaborators to create an information portal that can be used by all the Antarctica Treaty partners. This has been a constructive kiwi collaboration. The portal will make science more accessible to policy-makers. That's something needed around the world these days, so we are already seeing wider interest in the product."

The information available through the Portal is based on published, peer-reviewed science and has been through a rigorous review and editorial process. The portal aims to link Antarctic science with Antarctic policy through the provision of this information on environmental issues in Antarctica, together with supporting maps, resources and links. This includes information on issues such as the introduction of non-native species, protected areas and climate change. The support shown at the meeting underlines the importance of the portal in supporting a strong and effective Antarctic Treaty, and the important role that New Zealand plays in the environmental protection of Antarctica.

The full version of the Antarctic Environments Portal will be launched at the next Antarctic Treaty meeting in Bulgaria in 2015.