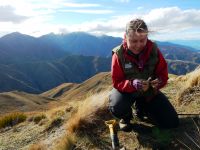 Landcare Research scientist Barbara Anderson digs up tea bags on the sunny side of the mountain (1300m).

It was a “race against the weather” for Landcare Research scientist Barbara Anderson to unearth 810 tea bags buried on Mt Cardrona.

The tea bags at the top of the Central Otago mountain were no longer just under dirt but snow.

Despite challenging conditions, Anderson and her four colleagues recently managed to recover 755 of the tea bags, which had been buried three months ago as part of her climate change study.

Anderson is using this novel approach, known as the Tea Bag Index (TBI), to see how climate conditions affect the speed in which organic material decomposes. The TBI, recently developed by scientists in the Netherlands and Iceland, is now being used across the world to understand climate change.

The area the tea bags were buried spanned from the peak of Mt Cardrona at 1936m to the valley floor at 500m in order to cover a range of environmental conditions.

“It took ages to get the top ones out as the soil was frozen,” Anderson said.

The group had to chip away at the frozen soil with their shovels.

“It was a race against the weather and we just beat it,” she said.

“Had we not retrieved the tea bags before the snow settled they would’ve likely been stuck there until spring and the top elevation data lost as the tea bags are buried for a standard three months.”

She was “thrilled” the majority of tea bags were retrieved.

Over the coming weeks the contents of the tea bags will be dried and then weighed. The tea bags were weighed before being buried. The difference will reveal what impact climate conditions have on the speed in which organic material decomposes. If decomposition occurs fast more carbon is released into the atmosphere, while if it’s slow more carbon is retained in the soil.

Anderson said it was clear just looking at the tea bags that the speed in which the contents decomposed varied greatly.

“Soils represent a significant store of terrestrial carbon. Predicting how the changing climate will affect the volume of these stores and rates is vital to understanding how ecosystem processes and services will respond.”

Information will also be retrieved from 117 temperature recording devices that were buried alongside the tea bags.