New research indicates that the speed of early forest clearance following human colonisation of the South Island of New Zealand was much faster and more intense than previously thought. 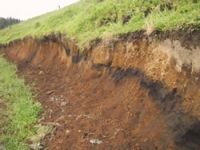 New research indicates that the speed of early forest clearance following human colonisation of the South Island of New Zealand was much faster and more intense than previously thought.

Charcoal recovered from lake-bed sediment cores shows that just a few large fires within 200 years of initial colonisation destroyed much of the South Island’s lowland forest. Bracken and shrubland then replaced the burnt forest and smaller fires prevented forest re-establishing.

The findings - by a team of New Zealand and American researchers - have just been published in the prestigious journal Proceedings of the National Academy of Sciences of the United States of America.

This study shows the extent to which a small number of settlers can transform a vast and topographically complex landscape through land-use change alone, and highlights how exceptionally vulnerable New Zealand forests were to fire in the past. The authors suggest that understanding the history of people and fire in New Zealand will help researchers and managers develop informed forest fire management and conservation strategies.

Previous studies by co-authors Dr Matt McGlone and Dr Janet Wilmshurst of Landcare Research showed that closed forests covered 85-90% of New Zealand prior to the arrival of Polynesians (Māori) 700-800 years ago, but by the time Europeans settled in the mid-19th century, grass and shrubs had replaced over 40% of the South Island’s forests. Despite this information, questions remained over the timing, rapidity, and cause of the extensive forest clearance.

Dr Dave McWethy from Montana State University led a team that reconstructed the environmental history of 16 small lakes in the South Island. They used pollen records to reconstruct past vegetation, charcoal fragments to document fires, and algae and midge remains to quantify changes in lake chemistry and soil erosion.

The cores showed that several high-severity fire events occurred within two centuries of known Māori arrival in the 13th century.

“The impacts of burning were more pronounced in the drier eastern forests where fires were severe enough to clear vast tracts of forest and cause significant erosion of soils and nutrients. Because initial Māori populations were small, we can only conclude that forests were highly vulnerable to burning,” Dr McWethy said.

Dr Wilmshurst said archaeological evidence suggests that successful cultivation of introduced food crops, such as kumara and taro, was only possible in warmer northern coastal areas and so the starch-rich rhizomes of bracken fern, which replaced the burnt forests, provided an essential part of Māori diets in colder regions.

“In their efforts to increase the productivity of lowland forests for food, Māori encouraged a more heterogeneous and economically useful fern-shrubland at the same time as making travel easier to search for food and stone resources for making tools,” Dr Wilmshurst said.

Newly derived indicators of past climate provided records that enabled the team to disprove the hypothesis that unusual climate conditions encouraged fire at around the time of Māori settlement.

“Our new evidence suggests that human activity was the main cause of the fires, and that these fires were not related to any unusually dry or warm conditions at the time,” Dr McGlone said.

Before human arrival in New Zealand, fire was naturally rare in most forests, with lightning-started fires occurring perhaps only once every one to two thousand years.

“What is remarkable is that small, mostly subsistence-based groups of people were able to burn large tracts of lowland forests causing forest loss throughout the relatively large South Island (151,215 km2) in only a few decades,” Dr McWethy said.

“In some regions, this degradation was exacerbated by intensive clearance in the 19th century by European pastoralists who developed the land for stock grazing.”

This paper's abstract is available on the Proceedings of the National Academy of Sciences of the United States of America website. Rapid landscape transformation in South Island, New Zealand, following initial Polynesian settlement.