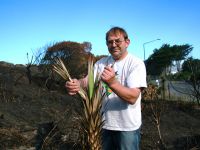 Dr Colin Meurk expects some of the burnt plants, like this cabbage tree, will regenerate.

The ecologist behind a dune restoration project extensively damaged by a suspicious fire holds hope some of the native plants will regenerate.

The blaze tore through the dunes on Marine Parade (next to the North Beach Surf Lifesaving Club), in North New Brighton, eastern Christchurch, about 5.40pm on Saturday.

The native plants were planted in 1990 by hundreds of volunteers from the community as part of several projects to mark the 150 years (sesquicentennial) since the Treaty of Waitangi. The projects aimed to restore and celebrate the full range of diverse natural habitats that once existed across the city.

Landcare Research ecologist Dr Colin Meurk, who initiated the restoration, said the extensive damage caused to the well-established plants by the suspicious fire was “soul destroying”.

The site had been threatened by fires in the past but had escaped with only the “fringes” burnt, he said.

This time it was not so lucky. About half the total restored coastal bush was burnt.

“It would take decades to return the area to the way it was," Meurk said.

Despite the damage, he was trying to remain positive.

“I’m pretty upset about it but I’m heartened by the fact two large blocks survived, so it could’ve been worse. Still it’s a huge setback – 25 years of effort and nurturing of the site and watching it develop, suddenly back to square one.”

Fortunately, some of the native species planted can cope with fire, Meurk said. These include cabbage trees, akeake and ngaio. Some of the burnt cabbage trees still had some green foliage.

“These three woody plants have some ability to regenerate either by sprouting or seeding after fire. If we get some rain in the next few months there’s a good chance they will regenerate. I hope there will be some of that.”

However, additional planting would also be required to restore the site fully and quickly, he said.

Meurk was pleased to hear the city council had pledged to replant the area and looked forward to providing information to assist in the recovery of the valued community asset. The native plants provide shelter, control dune erosion, prevent sand drift onto roads and residential properties, and provide habitat for wildlife, particularly birds, insects and lizards.