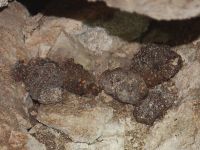 Kakapo coprolites in a cave in Nelson

Fossilised bird dung from a cave in the northwest corner of New Zealand's South Island has provided new insights into the lives of two of the country’s most threatened species.

Researchers at Landcare Research and the Department of  Conservation in New Zealand, and the University of Adelaide in Australia, made  a surprising discovery while analysing the content of fossilised dung  (coprolites). One of the coprolites contained abundant pollen of dactylanthus  (also known as the wood rose), an endemic New Zealand plant that parasitises  the roots of native trees. Ancient DNA and radiocarbon analyses showed that the  coprolite had been deposited by a kakapo, a rare flightless parrot, some 250  years before humans first settled New Zealand.

"This shows that  kakapo and potentially many other nectar drinking birds once fed on the nectar  of dactylanthus flowers and may also have acted as pollinators or seed  dispersers for the plant. It also  represents the southernmost record of dactylanthus, and extends the known  pre-settlement range of the species by approximately 50 km further south."

Co-author Dr Janet Wilmshurst said dactylanthus is now restricted  to an estimated 4% of its pre-human range, occurring in scattered populations  concentrated around the central North Island. It is threatened by forest  clearance, browsing by introduced mammals – especially possums and ship rats –  and illegal collecting of the underground wood roses.

Department of Conservation dactylanthus researcher, and co-author  of the study, Dr Avi Holzapfel said the endangered New Zealand lesser  short-tailed bat is presently the only known native pollinator of dactylanthus.

“However, we don’t really know the role that rare and extinct  fauna once played in the pollination and seed dispersal of plants such as  dactylanthus. Analysis of coprolites is one of the only ways that we can detect  these broken relationships with a view to one day restoring them".

In the study,  published in the journal Conservation  Biology, the authors discuss how coprolites can provide a tool for  detecting past ecological relationships between species that, due to population  declines, no longer co-occur.

Diedre  Vercoe, the manager of the Kakapo  Recovery Programme, said research on kakapo coprolites can also provide details  of kakapo diet in habitats they no longer occur in, but which one day they may  be re-introduced into.

“With the  transfer of eight kakapo to Hauturu / Little Barrier Island earlier this year,  the kakapo and dactylanthus have been re-united. It will be fascinating to see  whether this relationship is restored”.

DOC now plans to initiate the use of small cameras to observe if  kakapo, or any other nectar drinking birds, do in fact effectively pollinate  dactylanthus.

Professor Alan Cooper of the University of Adelaide, a further  co-author on the study, said the research had wider implications for species  conservation.

“This is an important example of an apparent tight co-evolutionary  relationship between threatened endemic species – the plant and the bat –  simply representing ‘the last men standing’. The coprolites suggest that kakapo  may have served as pollinators, probably along with other species, which is  critical for conservation - and reveal the extent of the ecosystem links which  have been broken.”