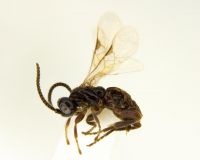 Characters in Tolkien’s book ‘Lord of the Rings’ have influenced the names of newly discovered species of wasps that are small, short and stout – just like Hobbits.

New species were named after Bilbo, Frodo,  Sam, Merry and Pippin. A sixth new species is named after Tolkien himself. The  new genus was named "Shireplitis". The first part of the name  "Shire" refers to The Shire, the region exclusively inhabited by  Hobbits. The ending "plitis" refers to the similarity of another  genus of parasitoid waps, "Paroplitis", which is found in Europe,  North America, and South East Asia.

The new genus (Shireplitis) is only found  in New Zealand but it is morphologically very similar to the genus  "Paroplitis", in spite of the huge separation in the geographical  distribution of both genera.

‘We think these similarities have evolved  due to similar ecological conditions that these small wasps species face when  looking for their prey (caterpillars). This has made them look alike despite  the fact they are not closely related,’ Dr Ward says.

‘This is a nice example of convergent  evolution, and a fascinating testimony of how life evolves under similarly yet  slightly different conditions.’

Dr Ward says this particular group of  parasitoid wasps are very important for horticulture and agriculture  because they help control pest caterpillars on fruit trees and vegetable crops.  Consequently they help reduce/eliminate chemical sprays being used on crops,  but also increase yields & productivity.

The research is part of a larger project  looking at the identification of wasps in New Zealand.

The article is open access and can be  freely accessed.
Fernandez-Triana JL, Ward DF, Cardinal S,  van Achterberg C. 2013. A review of Paroplitis (Braconidae,  Microgastrinae), and description of a new genus from New Zealand, Shireplitis,  with convergent morphological traits. Zootaxa 3722 (4): 549-568