Landcare Research is today celebrating the success of two scientists who are the recipients of significant grants from the Marsden Fund. 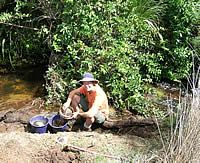 Landcare Research is today celebrating the success of two scientists who are the recipients of significant grants from the Marsden Fund.

The Marsden Fund is regarded as a hallmark of excellence, allowing New Zealand’s best researchers to explore their ideas and supports projects in the sciences, technology, engineering and maths, social sciences and the humanities and is administered by the Royal Society of New Zealand on behalf of the government.

Solving an enigma: the prehistoric Moriori settlement on the Chatham Islands

The puzzling and controversial origins of human settlement of Rekohu (the Chatham Islands) will come under the microscope as a result of new Marsden funding.

Dr Janet Wilmshurst from Landcare Research has been awarded a grant of $830,000 to resolve a significant chapter of New Zealand’s prehistory by providing a precise age for Moriori settlement on the islands.

“The conventional thinking is a bit mixed really because current information about the timing and origins of Moriori settlement on the Chathams is incomplete and often contradictory,” Dr Wilmshurst says.

“Moriori whakapapa and traditions, language differences between Moriori and Māori, and archaic adzes and ornaments are strong evidence for 13th century settlement. However, radiocarbon dating and evidence from coastal archaeology supports a much later settlement, around the 15-16th century.”

Recently published work by Drs Wilmshurst and Anderson analysed about 1500 radiocarbon dates from archaeological sites throughout East Polynesia, highlighting a consistent pattern for settlement of the remote islands including Hawaii, Easter Island, the Cook Islands, New Zealand and even the sub-Antarctic Auckland Islands all between 1200-1300AD.

“But radiocarbon dating evidence from the Chatham Islands is much later, indicating initial settlement about 1500AD which now seems like a bit of an anomly - it’s suggesting people were travelling between islands a long time after the initial settlement of the other island groups, which we don’t see much evidence for anywhere in the region. This may be true, but equally, we might just simply need to look harder for evidence of earlier human settlement on the Chathams”.

Dr Wilmshurst’s team will integrate archaeological, palaeoecological and ancient DNA evidence to provide a new and detailed understanding of pre-European Moriori culture and origins. Moriori relationships with Māori and other East Polynesian cultures, and the ecological change that followed settlement will also be studied.

This project will solve a major enigma in New Zealand prehistory, dispelling or proving long-held myths and in so doing will help to increase the recognition of a unique Moriori culture, heritage and identity.

Meanwhile, another Landcare Research scientist, Dan Tompkins, has been awarded $880,000 to further his research into our understanding of how diseases emerge, spread and persist.

For example, analyses of severe acute respiratory syndrome (SARS) cases indicate that the great majority were barely infectious but a small proportion was highly infectious, while the high variability in transmissibility of foot and mouth disease (FMD) virus makes epidemics difficult to predict.

There are two important types of individuals for disease spread in populations - ‘superspreaders’ (highly social individuals) and ‘supershedders’ (highly infectious individuals) - and learning more about their social behaviour and how they interact is critical for better disease management.

For example, if superspreaders are also supershedders, management strategies could underestimate the effort required to successfully control outbreaks. Dr Tompkins aims to provide the first proof for such effects, using bovine Tb in wild possums as a model system.

“In doing so, this project will provide a fundamental science advance essential for understanding disease dynamics, and successfully preventing disease emergence, spread and persistence. If we can target management to those individuals that are the key contributors to disease dynamics, be they in native species, domestic animal or human populations, then we can make our efforts to control diseases more efficient and more effective.”