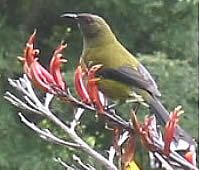 The number of birds in garden across the country is up this winter, according to preliminary results from the New Zealand Garden Bird Survey.

Spurr  said bird counts of most species were higher than average for the previous  eight years – silvereyes in particular.

“This  may reflect the harsh early winter conditions around the country, bringing birds  into gardens in search of food,” he said.

The  top 10 birds recorded in gardens, so far, were consistent with those over  recent years - except for one change. The song thrush has dropped out and the  goldfinch soared in.

“The goldfinch hasn’t been in the top 10 for about three years,” he  said.

The  house sparrow remained the most numerous species, followed by silvereye.

So  far, more than 1300 people have taken part, entering their results online.

“The  response from the public has been fantastic but we’re still hoping a lot more  people will do the survey in the remaining few days.”

The  survey is open to anybody who can identify birds in their garden. To find out  more and to take part in the survey, go online to: http://gardenbirdsurvey.landcareresearch.co.nz

You  can also find out about the survey on Facebook, where people are sharing their  experiences and photographs of birds in their garden:
www.facebook.com/groups/nzgardenbirdsurvey.

Graph showing average number of birds per garden for the top 10 bird species  (excluding gulls) from 1321 gardens surveyed so far (2015 data unedited and not  weighted, 2007–2014 data weighted by regional proportions of NZ households). 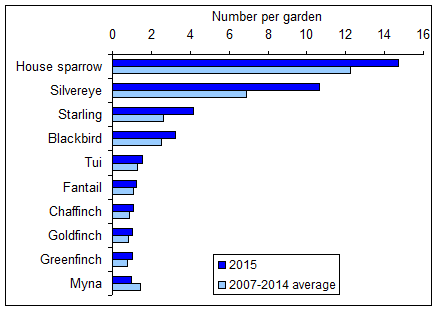