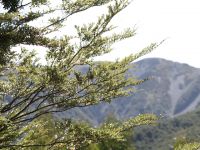 Mast seeding is the production of unusually high quantities of seed that occurs in some plants and in some years. It is quite common in New Zealand plants including beech trees, and also occurs in Northern Hemisphere trees such as oaks, beeches, pines and spruce. These occasional large flower and seed crops usually lead to big increases in populations of seed consumers (e.g., mice and rats) and consequently predator populations (e.g., stoats, feral cats). Unfortunately when the introduced rodents and other mammal predators in New Zealand ecosystems increase – or ‘pulse’ - they generally consume more native birds and insects .

Much research has gone into trying to understand what triggers mast seeding so it can be predicted. This would provide at least a one-year advance warning of a predator pulse which could then be effectively managed to protect native birds, lizards and invertebrates. Masting can also also affect other ecosystem processes, including nutrient cycling and disease outbreaks.

Previous research suggested that synchronizing flowering cues are almost always weather-related, with warm temperature in the previous summer most often cited . But while mast-seeding plants often produce high seed crops the year after a warm spring or summer, this warm-temperature prediction method does not always work, sometimes predicting mast seeding when it doesn’t happen, and sometimes failing to predict a masting event.

In a new discovery published in the international journal Ecology Letters, a team from the University of Canterbury (Dave Kelly, Andre Geldenhuis, Alex James, Mike Plank), Landcare Research (Andrea Byrom, Pen Holland, Bill Lee, Phil Cowan) and a number of other colleagues found that the climate signal that triggers masting is the change in mean (average) summer temperature between the preceding two years, not simply temperature in the previous summer.

The researchers analysed 26 very long mast-seeding datasets from New Zealand spanning 15 species in five plant families. The length of time seed production and/or flowering was measured ranged from 15 to 43 years, and the data covered a range of different habitats (alpine to lowland) and plant life forms (trees, grasses, daisies). They also compared the results from the New Zealand datasets with 20 of the longest-running Northern Hemisphere datasets, covering 17 species from North America, Japan, Italy and Finland.

The findings consistently showed that a wide range of mast-seeding species respond to the difference in temperature from one growing season to the next, i.e. the change in mean summer temperature between the two preceding years. This finding was consistent both for the New Zealand and international data sets.

The temperature-difference model was also a much better predictor of the rare phenomenon of consecutive high-seed events (double masts), which occur only after a specific sequence of cold/warm absolute summer temperatures. One example was 1999/2000 in beech forest throughout the South Island, which caused increased predation of threatened endemic birds from the Eglinton Valley in Fiordland to Mt Stokes in the Marlborough Sounds.

The ability to use existing climate information – already collected by NIWA and the Met Service across the whole country – to better predict these rare but critical events is a benefit to conservation managers.

The temperature-difference model is providing a new understanding of mast seeding under environmental change, and improved prediction of threat risk for conservation managers. This will allow more effective protection of threatened native species such as the yellowhead and takahe. The researchers are now turning their attention to how the temperature-difference model improves predictions of rodent irruptions in New Zealand forests.