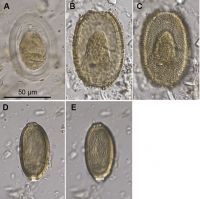 New research could provide insights into co-extinction of threatened species and help improve estimates of the actual numbers of species currently at risk of extinction.

The work, led by Landcare Research also highlights the importance of considering all species when examining past extinction events, and when assessing numbers of presently endangered species.

Researchers studying coprolites (ancient dung) of New Zealand’s extinct moa discovered microscopic eggs and DNA that shed light on the parasites that once lived in the digestive tracts of these giant birds.

The study, published in the online open-access journal PLOS ONE (http://dx.plos.org/10.1371/journal.pone.0057315) found evidence that moa were parasitised by a range of nematodes, trematodes, and apicomplexans (a group of unicellular microorganisms).

“Most vertebrates, including humans, have a variety of parasite species that can inhabit their gut”, lead author Dr Jamie Wood said.

“Often these parasites can only survive in a limited number of host species, which can be problematic if those species go extinct”.

Study co-author Dr Janet Wilmshurst, also of Landcare Research, said that although coprolites from four moa species were analysed, several of the parasites appeared to be restricted to just one of the moa species.

“This suggests a high degree of host-specificity – it is unlikely that these parasites would have been able to switch to another bird species, and in all likelihood they became extinct alongside moa”.

Study co-author Professor Alan Cooper, director of the Australian Centre for Ancient DNA at the University of Adelaide, said “historically, our focus has been on large charismatic fauna, and smaller organisms such as parasites have often been overlooked. As a result we may have greatly underestimated the full impact of past extinction events on total biodiversity”.

Co-extinction is not new to New Zealand. In the late 1980s, close examination of huia specimens in museums revealed a species of louse that had only lived on huia feathers, and as a result had become extinct alongside its host. However such discoveries are relatively rare. The researchers hope that further analyses of coprolites, from a range of different extinct species, may provide much-needed quantitative data on co-extinctions.