New tool assists in the identification of parasitoid wasps 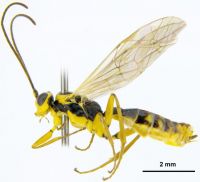 A new online tool will assist biosecurity and conservation managers identify a diverse and important group of wasps in New Zealand.

There are approximately 2000 species of Hymenoptera (ants, bees, parasitoid wasps) in New Zealand and parasitoid wasps of the family Ichneumonidae are the most numerous with an estimated 500 species.

However, Landcare Research scientist Darren Ward says detailed information and identification on Ichneumonids in New Zealand is largely non-existent. Currently, 4 out of 5 species (80%) are undescribed, yet they’re important, abundant and commonly collected, Dr Ward says. In fact, a number of species are currently used in New Zealand as biological control agents to help control horticultural, agriculture and forestry pests.

Ichneumonids most frequently attack the larvae and pupae of moths, flies or beetles. Generally, an adult female lays an egg inside a host, and the ichneumonid larva feeds selectively within its host, avoiding damage to the host, which continues to feed and grow like a normal larva. When the host is almost fully grown, the ichneumonid larva consumes its insides entirely and breaks free from the host, then spins a cocoon under or next to the host's larval remains and pupates, Dr Ward says.

This project will help end users with identification of these wasps by providing an interactive key, image database and factsheets.

Dr Ward’s work was funded by the Terrestrial and Freshwater Biodiversity Information System (TFBIS) programme which is funded by the Government to help to achieve the goals of the New Zealand Biodiversity Strategy, and is administered by the Department of Conservation.

A YouTube clip of an ichneumon wasp taken from the BBC's Life in the Undergrowth documentary series: http://www.youtube.com/watch?v=SLvuevf__Ok .