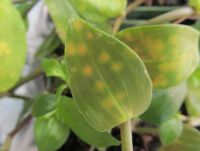 Dogs in the Rotorua area could see their dermatitis clear up with the world’s first field release of a Brazilian fungal biocontrol agent aimed at combating the invasive weed tradescantia.

The release of the tradescantia yellow leaf spot fungus was made on 5 March at Rotorua by the Bay of Plenty Regional Council and Manaaki Whenua - Landcare Research.

Tradescantia is an insidious weed that quickly takes over gardens as well as local reserves and is known to give dogs dermatitis. It is hard to get rid of because any scrap left behind can re-sprout. It thrives in shade, damp conditions, and most soil types, with it leaves forming large, dense mats that prevent native species regenerating.

The release marks the first time the fungus will be released in any country as a biocontrol agent.

Manaaki Whenua technician Chantal Probst says the yellow leaf spot fungus has been extensively tested and is host specific, so is highly unlikely to attack any other New Zealand plant life.

The fungus, which works by infecting the weed and damaging the epidermis, causing the leaves to shrivel and die, will be ‘released’ via the planting of lab-infected plants among healthy tradescantia plants.

Dr Probst says it’s hard to determine how long it will take for the fungus to become properly established as it is the first time it has been released in any country as a biocontrol agent. The EPA gave permission to release the fungus in 2013, but it was not imported and released immediately to allow three species of tradescantia beetles to establish and determine whether the fungal agent would be required.

The beetles, released in 2011, 2012, and 2013, have established well and are showing great promise; however, some release sites have flooded and, since tradescantia often occurs in riparian areas, flooding will likely be a regular occurrence in some infested areas. As the beetles could struggle in areas that are subject to regular flooding, the fungus will likely be better suited to these areas.

While the fungus will initially be released into areas without any beetles, in the future this agent and the beetles are expected to complement each other and a monitoring project has been set up to measure their effectiveness.