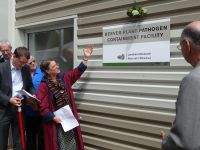 The $2.2 million Beever Plant Pathogen Containment Facility was opened today in Auckland and will boost Landcare Research’s weed biocontrol programmes which until now have had to rely on overseas facilities and collaborators to undertake trial work involving plant pathogens.Biocontrol is a sustainable and environmentally friendly method of controlling weeds such as broom and gorse using other living organisms such as fungi, insects, and mites. Landcare Research staff have become world renowned for their expertise in this field.

“As well as weed biocontrol studies the facility will also be suitable for safely undertaking research into invasive plant pathogens that pose a threat to native flora and to crop plants. These include the PTA pathogen causing Kauri dieback, and the Psa bacterium devastating kiwifruit,” says scientist Stan Bellgard, who played a key role in the design of the facility.

The facility will also enable some biocontrol research that was previously not possible. For example, the Brazilian yellow leaf spot fungus (Kordyana sp.), which attacks tradescantia (wandering willie) and is being considered for release in New Zealand, requires plant to plant infection. Obtaining safe, clean material of the fungus for release could not be done without access to a containment facility in New Zealand, since none is available in the weed’s homeland of Brazil.

Although the facility will be primarily used to securely hold and study plant pathogens and their host plants, it can also be used to research insects and other invertebrates in containment if required.

One of the key features of the facility is the ability to grow plants in sealed glasshouses that meet a high level of safety and security of containment and provide natural light.

Other biosecurity and research organisations including the Ministry for Primary Industries (MPI), other CRIs, universities, overseas research institutes, businesses, and private individuals will also be able to use the facility.

The first ‘inhabitants’ - likely to be the Environmental Protection Agency (EPA) approved lantana rusts (Puccinia lantana, Prospodium tuberculatum) - should be in place prior to Christmas with releases beginning in the new year.

The facility is named in honour of the late Dr Ross Beever and his wife Dr Jessica Beever who have made significant contributions to fungal taxonomy and genetics, plant pathology, botany, and to conservation of New Zealand’s flora and fungi.