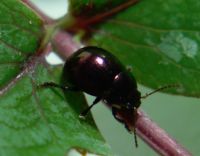 Tutsan is a significant pest in parts of the Central North Island because it forms extensive patches that take over agricultural, production and conservation land. Unpalatable to stock, hard to kill, and shade tolerant, Tutsan is particularly prevalent in areas where the land has been disturbed by the likes of forestry – much like gorse and broom does.

It can be spread by birds and possibly possums as well as soil and water movement and common seed sources include roadsides, farms, wasteland, old gardens, and even roadside mowing. It has been estimated that the cost to land values and cost of production losses due to Tutsan is up to $30 million each year.

Hugh Gourlay from Landcare Research recently travelled to Georgia in Europe to collect specimens of a leaf-feeding beetle (Chrysolina abchasica) and a fruit, leaf and stemfeeding moth (Lathronympha strigana) that are known to attack Tutsan.

“We think Georgia is the origin – or one of the origins – of Tutsan so that’s why we looked there for potential biocontrol agents,” Mr Gourlay says.

“On the recent visit I was able to collect 125 adults and larvae of the Tutsan leaf-feeding beetle and around 50 larvae of the fruit, leaf and stem-feeding moth. These were collected from Mtirala National Park near Batumi in Georgia”.

“The beetle attacks and feeds on the foliage while the moth attacks stem material. They seem to be host-specific in their native range and quite damaging to Tutsan so it will be good to get them settled into containment to undertake more testing and research. This is likely to take up to one year.”

Biocontrol offers a cost-effective, environmentally friendly, and permanent solution to weed control. Carefully selected biocontrol agents target only weeds, don’t harm desirable plants, and don’t pollute the environment. Once established, they travel wherever the weed spreads and can return again and again to kill off new weed growth—all without human input.

Landcare Research has permission from the EPA to import the beetles and moths and will undertake the testing on behalf of the Tutsan Action Group, a farmer-led action group with support from Horizons Regional Council and the Sustainable Farming Fund.

Tutsan rust (Melampsora hypericorum) was self-introduced to New Zealand in the 1950s when Tutsan was considered a serious pest in both islands. By the 1970s Tutsan had almost disappeared thanks to the rust but in the late 1990s the plant began to reappear and rapidly spread in the North Island especially around the Ruapehu and Bay of Plenty regions.

“It’s an odd situation,” Mr Gourlay says. “Our studies have shown that we have primarily two types of plants and two types of rust, one for each Island, in New Zealand. The rust still works well in the South Island, where the plant is uncommon, yet it is now largely ineffective in the North Island. One would assume there’s some sort of plant resistance to rust in the North Island and so as part of our research we’re currently investigating other strains of the rust that could be effective on the North Island plant.”