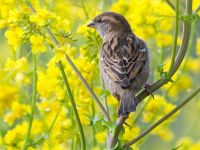 House sparrows are again the most abundant bird species in New Zealand gardens with preliminary results of the 2012 Garden Bird Survey indicating an average of 12.3 per garden.

More than 4000 people participated in the annual survey that took place from 30 June to 8 July. Since its inception in 2007 participants have been asked to look for birds in their gardens for one hour, and for each species they detect record the maximum number seen or heard at any one time over that hour.

House sparrow were followed by silvereye, blackbird and starling in abundance and some of the more unusual birds included a fernbird, kea, robin, white heron, and kookaburra.

Survey organiser Eric Spurr said the most significant result this year was an increase in the number of silvereye.

“This could have been a result of snow and hard frosts in early winter forcing birds out of forests and into gardens in search of food. Last year the early winter was mild, so birds didn't move into gardens until later."

Dr Spurr said the response from participants throughout the country was fantastic and their observations help build up a picture of how both native and introduced birds are faring in our gardens over the years.

Data from paper copy survey returns are still being entered into the computer so final results won’t be available for a little while yet.

Based on results from previous surveys, house sparrows are more abundant in the north of the country than in the south, whereas silvereyes are more abundant in the south. Rural gardens have larger numbers of birds of most species than urban gardens, though the latter have larger numbers of house sparrows, silvereyes, and greenfinches. The provision of supplementary food for birds (bread, fruit, fat, seeds, or sugar-water) significantly increases the numbers of species such as house sparrow, silvereye, greenfinch, starling, myna, chaffinch, and dunnock.