Research offers new insights into the lives of subalpine moa

New research has cast light on the diet of moa in subalpine environments and provided clues to the changing face of New Zealand’s ecology. 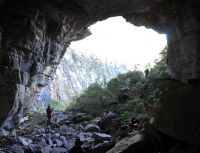 Entrance to the high altitude cave in the Kahurangi National Park

New research has cast light on the diet of moa in subalpine environments and provided clues to the changing face of New Zealand’s ecology.

While Landcare Research scientists have excavated and analysed coprolites (fossilised faeces) from lowland caves on the South Island in recent years, they have just completed a detailed analysis of 35 coprolites from a remote and difficult to access cave in the subalpine environment; a region from which the diets of moa are poorly known. The results have just been published in the international journal PLoS ONE.

The researchers led by Dr Jamie Wood descended steep bluffs to reach the high altitude cave in the Kahurangi National Park in 2010. In the cave's entrance they found the coprolites, some still sitting on top of the rocks where they had been deposited centuries ago.

"We extracted ancient DNA fragments from the coprolites, which showed that they had come from one species, the upland moa (Megalapteryx)" said co-author Professor Alan Cooper of the University of Adelaide, "and radiocarbon dating revealed they were deposited as long ago as 7000 years, making them the oldest moa coprolites yet discovered".

Another co-author Trevor Worthy, also based in Adelaide, said "the upland moa species was adapted for life in steep and rocky habitats, and was once common throughout the subalpine zone of the South Island. However, before this study very little was known about its diet and ecology".

Using pollen, plant macrofossil (seeds and leaf fragments), and ancient DNA analyses, researchers identified at least 67 plant species from the coprolites, including the first evidence that moa fed on the nectar-rich flowers of New Zealand flax (Phormium) and tree fuchsia (Fuchsia excorticata). The presence of intact seeds in many of the coprolites suggests that moa were an important seed disperser for a range of alpine plant species.

The results of the study are important because knowledge about the diet and ecology of extinct herbivores such as moas has important implications for understanding the evolution of plant defence structures, establishing the influence of herbivore extinctions on vegetation composition, and identifying pollination and seed dispersal syndromes in native plants.

Co-author Dr Janet Wilmshurst of Landcare Research said the research also had implications for understanding the ultimate demise of moa.

"It has always been a bit of a mystery how moa could have been exterminated so quickly from the remote mountainous parts of New Zealand. The abundance of pollen in the coprolites from spring and summer flowering plants suggests that moa were only up there during warmer months, and, may have come down to lower altitudes in winter where they could have been easier game for hunters".

Large herbivores such as moa play important ecological roles in terrestrial ecosystems, such as dispersing seeds, pollinating plants, and cycling nutrients. They also play a major role in shaping vegetation composition and structure, and influencing fire regimes. The relatively recent extinction of moa means that the ecological impact of their loss is yet to be fully realised. Some long-lived trees that may have had their juvenile branches browsed upon by moa, or grown from seeds dispersed in moa dung, may still be present in forests today. Data on moa diets are therefore critical for providing a deeper understanding of how their extinction has impacted New Zealand's native vegetation communities.