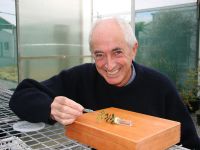 A tiny Chilean beetle has been introduced to New Zealand in a bid to control a weed that if left unchecked could potentially become as big a problem as gorse.

Landcare Research, a Crown research institute which focuses on environmental science, recently provided Environment Southland with about 70 barberry seed weevils to release just north of Invercargill as a biocontrol agent for Darwin’s barberry. The fast-spreading orange-flowered thorny shrub has become a huge problem across the country, threatening to overrun native plants and farmland – particularly in Southland.

It is the first time this species of weevil, a type of beetle, has been used as a biocontrol agent anywhere in the world.

There are plans to release more - several thousand - early next year.

The pilot release of the beetles comes after years of research by Landcare Research, led by researcher Lindsay Smith, and collaboration with Chilean scientists.

The adult weevils will assist in controlling the weed by feeding on the plants’ new growth. However, it is the larvae - that feed on the seeds – which are expected to have the biggest impact, Smith said. Darwin’s barberry produces large numbers of viable seed that can be spread hundreds of meters by birds that consume the fruit on the weed.

“The larvae are the ones that will do the most damage as they will destroy the seeds and reduce the spread of the weed,” Smith said.

Extensive tests were carried out on both the adult weevils and their larvae to ensure they could not damage any other plant species.

However, researchers are currently focused on establishing the barberry seed weevil first before deciding whether another weevil which attacks the flowers is needed.

Plant pathogens, which could potentially damage the plants themselves, are also being studied to assess their potential.

Fowler said the release of the barberry seed weevil had been a milestone after facing a range of challenges.

Among these hurdles was finding the imported adult beetles were suffering from an unwanted disease. But researchers discovered the disease was not transmitted to the larvae. So they imported the weed’s fruit which contains only the larvae.

However, they then ironically faced difficulties growing the weed in containment. It would quickly drop its flowers and fruit, Fowler said. To overcome this, researchers sought permission from the Ministry for Primary Industries to release the beetles soon after they emerged from the imported fruit once tests had shown them to be free from the disease.

The release of the weevils was approved by the Environmental Protection Authority in 2012. Environment Southland applied for the consent on behalf of the National Biocontrol Collective.