Study finds seabird to have a distinct New Zealand whakapapa 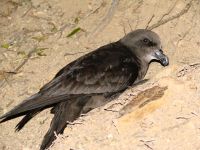 The grey-faced petrel will be well-known to many as the North Island muttonbird (or oi, kuia or tītī to North Island iwi).