Taking the sting out of wasps 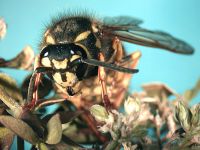 Control measures and more funding are needed to stop the havoc being wreaked on New Zealand’s native forests by wasps, say scientists who hosted a workshop held recently at Victoria University.

“The target is well defined—summer wasp densities need to be reduced by 80 to 90  percent of current levels,” says Professor Phil Lester from Victoria’s School  of Biological Sciences.

“Over the last few years, scientists have been hamstrung by a lack of wasp control  technologies appropriate to New Zealand conditions.”

A Wasp  Tactical Group established at the workshop welcomes participation from  organisations counting the cost of wasps. Its goal is to develop a pathway to a  New Zealand free of the wasp burden.

“German  and common wasps can reach densities of over 350 wasps per square metre,” says  Dr Darren Ward of Landcare Research.

“Wasps are  so abundant in many native forests that they pose a major health and safety  risk to those working and playing outdoors. They are voracious predators that  cause declines in native biodiversity and reduce our ability to enjoy  recreation activities.”

Professor  Lester says efforts to control wasps are currently limited, although wasp  control through bait stations could be an effective solution.

“We need  to attack the wasp problem in the same way that we carry out intensive stoat  and rat control in national parks but, unfortunately, the investment in getting  these systems on to the market isn’t happening yet.”

Eric  Edwards from the Department of Conservation agrees. “A large scale approach is  needed and researching options for biological control, such as using pathogens  and parasites over the one million hectares currently affected, is a wise  investment in sustainable wasp control.”

Many at  the workshop were surprised at the scale of New Zealand’s wasp problem and most  participants had wasp-associated problems that needed a combined effort to find  solutions for management.

The scientists who organised the workshop say it is clear that the impact of wasps on  biodiversity warrants a well-funded investigative programme and benefits would  extend to other sectors.

The workshop brought together researchers from Victoria University and Landcare  Research along with people affected by wasps in conservation and recreation  such as iwi, regional councils, pest control organisations, and the forestry  and beekeeping sectors.

The first Vespula wasp to establish in New Zealand was the German wasp (V.  germanica), which arrived in the Waikato with aircraft parts in 1945. The  German wasp spread rapidly and became a significant pest.

The  common wasp (V. vulgaris) is thought to have arrived in the late 1970s,  but was unnoticed at first due to its similar appearance to the German wasp.  The common wasp quickly replaced the German wasp in some environments and is  now the most abundant species, particularly in the South Island.