Tea bags as a research tool 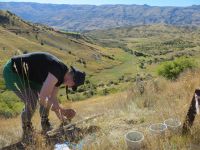 Barbara Anderson recently went through more than 800 tea bags in two days. Sounds like a world record attempt doesn’t it? Yet not one cup was brewed. Instead, they were buried.

The Landcare Research scientist is using a novel approach, called the Tea Bag Index (TBI), recently developed by scientists in the Netherlands and Iceland, which is being used across the globe to understand climate change.

The approach measures the speed in which organic material decomposes. The carbon in the decaying material is either retained in the soil or released into the atmosphere as carbon dioxide.

Dr Anderson aims to use the approach to see how decomposition rates relate to varying climate conditions. The tea bags were buried at different aspects from the top of Mt Cardrona (1936m) to the valley floor (500m) to cover a range of environmental conditions.

“One of the things we want to look at here in New Zealand is how that decomposition rate is influenced by temperature, and the specific plants and microbes at a location.”

Anderson said the new approach aims to make it easier to measure and compare decomposition rates in different environments. The traditional approach uses handmade bags of dried organic material, referred to as “litterbags”.

“The litterbags are not only time consuming to make but there’s a huge amount of variance in the plant material in the bags unlike the tea bags which are standardised,” she said.

“Lipton pyramid tea bags were chosen as they have synthetic mesh bags so only the tea decomposes, not the bags. Both the green tea and rooibos varieties were also believed to be readily available from supermarkets all over the world. But it’s actually really hard to get those specific tea bags here in New Zealand.”

Dr Anderson had to call on colleagues, family and friends to source the tea from the United States, Germany and the Netherlands.

Once the tea bags arrived, they were weighed before being buried. After 90 days they will be dug up and reweighed. The decomposition rate is based on the difference between the weight change in the green tea and the rooibos, Dr Anderson said.

The data collected will be made available to the scientists who developed the TBI to use in global soil maps and climate models, she said.

The tea bags are expected to be dug up in late-April.

“The rate that organic matter degrades is one small piece in the puzzle of what will happen with climate change. The balance between carbon stored in the soil and carbon released back into the atmosphere is dependent on many factors including temperature and in turn has the potential to accelerate or buffer the effects of climate change,” Dr Anderson said.

Anderson’s colleague Adrian Monks is also using the Tea Bag Index in the Takahe Valley, in Fiordland. He has buried 240 tea bags.