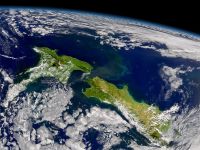 What does the latest satellite Earth observation technology mean for New Zealand industry, environment and climate? March’s ‘What On Earth’ Colloquium in Wellington is the perfect place to answer that question.

Venture Southland in partnership with the newly-formed New Zealand Space Agency, Manaaki Whenua - Landcare Research, Land Information New Zealand (LINZ) and the Centre for Space Science Technology (CSST) is hosting the event at Te Papa in Wellington on March 6 and 7.

Following the establishment of Southland’s satellite ground station at Awarua in 2008, Venture Southland hosted the first “What On Earth?” Colloquium in 2011 in partnership with the Royal Society of New Zealand and the European Space Agency.

Mr Canny said the second event in March would profile leading edge New Zealand and International projects with industry and state sector applications, bring together people from a wide range of sectors with an interest in Earth observation, and lay the groundwork for the creation of an Earth observation industry organisation.

The event will be of interest to industry users of land information, including those in the agricultural and forestry sectors, Space industry organisations, relevant policy makers and agencies, research and technical specialists and big data and machine learning specialists, he said.

MBIE General Manager, Science, Innovation and International, Dr Peter Crabtree said: “As we move towards a more diversified and lower-carbon economy, we need smart solutions to our big challenges, including in areas such as agriculture, smart cities and managing natural hazards.  The New Zealand Space Agency is  a committed partner in the What On Earth Colloquium as we believe it is a fantastic opportunity to build New Zealand’s earth observation community and strengthen the connections with key international players as we develop the New Zealand space industry.”

Justine Daw, GM – Partnerships, Manaaki Whenua-Landcare Research, said “Since the mid-1980’s, earth observation has been adding value to New Zealand research and industry. It has grown in size and sophistication since then, and the breadth of participation in the second What on Earth Colloquium is testament to this.”

“As environmental challenges accelerate, the problems our country must solve also increase.We are entering a new era of technological advances in this field that can be immediately translated into benefits for the New Zealand society. “

“It is a data set that is relatively new to the market but is advancing quickly. Now is exactly the right time for New Zealand businesses, industry and government to utilise this information and integrate it into their decision- making processes. Space has become a fast-paced industry, so the sooner we are able to get on board, the better.” Mr Kargren said.

Registrations for ‘What On Earth’ 2018 are open at www.whatonearth.co.nz