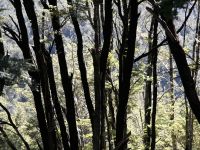 A new study has found there are more than three trillion trees in the world – about eight times higher than previous estimates.

That equates to about 422 trees-per-person in the world, not 61 as originally thought.

But it’s not all good news. The study, just published in the scientific journal Nature, also took into account the impact of human activity on forests. It estimates deforestation is currently responsible for removing over 15 billion trees each year and the global number of trees has dropped 46 per cent since human civilisation.

They used satellite imagery, forest inventories and supercomputer technologies to generate a map of the world’s forests. More than 420,000 ground-sourced measurements of tree density from every continent, except Antarctica, were used. These measurements were taken from more than 50 countries. Previous estimates relied solely on satellite imagery.

The data was originally collected for the Ministry for the Environment’s national carbon monitoring programme.

Wiser said the findings would be invaluable in managing climate change and guiding local, national and international reforestation efforts.

“The study also highlights the importance of our collections and databases, not just in underpinning New Zealand policy but in helping understand global patterns of tree density and how New Zealand fits in this global context,” she said.

Landcare Research general manager science Dr Peter Millard said it was important to have accurate numbers of trees across the globe in order to protect the precious resource.

“Trees are very important to us. They’re a major sink for carbon dioxide and source of oxygen. If we go on losing forests we’re in effect losing the lungs of the planet.

“The study is significant in that they’ve managed to calculate the rate in which trees have been lost,” he said.

Lead author Dr Thomas Crowther, a postdoctoral fellow at the Yale School of Forestry and Environmental Studies, said the study highlighted how much more effort was needed to restore forests worldwide.

“Trees are among the most prominent and critical organisms on earth, yet we are only recently beginning to comprehend their global extent and distribution,” he said.

The study found the highest tree densities in the boreal forests in the sub-arctic regions of Russia, Scandinavia and North America. However, the largest forest areas were in the tropics, which are home to about 42 per cent of the world’s trees.