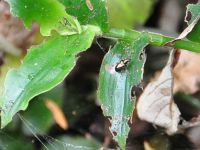 The beetles each feed on a different part of the weed.

A trio of Brazilian beetles have been released in Northland to tackle a weed threatening a “biodiversity hotspot”.

Tradescantia - or wandering willie – is widespread in the 13,140 hectare Hikurangi floodplain. Biodiversity in the floodplain has greatly diminished due to drainage and development and tradescantia is taking its toll on the remnants by smothering the ground, preventing regeneration of native species.

To help restore the floodplain Landcare Research are releasing the tradescantia tip beetle, tradescantia leaf beetle and tradescantia stem beetle. Each beetle feeds and causes damage to different parts of the weed.

Landcare Research scientist Dr Bev Clarkson, who is leading the project, and her colleague Dr Quentin Paynter, today (Wednesday 2 March) released hundreds of the beetles as part of an experimental trial.

The beetles, first introduced to New Zealand in 2011 by Landcare Research, are already making an impact at release sites around the country. As a result, the Wellington Botanic Gardens have bred their own tradescantia leaf beetles which will be released tomorrow (Thursday 3 March). Conservation Minister Maggie Barry will be attending the release which will take place in Alexandra Rd, Mount Victoria, between 12pm and 12.30pm.

Clarkson said the Hikurangi floodplain is a “biodiversity hotspot” characterised by nationally significant forest and wetland remnants which support some very special threatened and rare species such as the heart-leaved kohuhu.

“These remnants are the last remaining fragments of ecosystems that once dominated the floodplain,” she said.

Paynter said the beetles’ effectiveness will be compared to other control methods, such as spraying and hand weeding, which will also be carried out in the area, and will allow best practice for tradescantia control in similar remnants to be determined.

Plant regeneration and insect biodiversity will also be monitored.

“We have never set up a trial to compare biocontrol against other tradescantia control methods before,” he said.

The project is funded by Living Water – a 10-year partnership between Fonterra and the DOC which is working with farmers, iwi, conservation groups, schools and other agencies to improve the ecosystem health of five key catchments in significant dairying regions throughout the country.