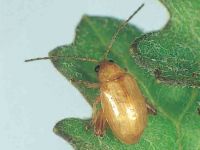 "Until now we have only been able to speculate on the financial benefits of the Ragwort flea beetle to farmers," said Landcare Research scientist Simon Fowler.

“We had no hard data. We had amazing before and after photos of the flea beetle’s work. But people need quantitative data so we revisited our research and we have now finished a national cost-benefit analysis”.

Fowler used data from a 2005 study conducted on the West Coast where the flea beetle has failed to thrive due to its wet climate. The amount of money West Coast farmers spent killing the weed was extrapolated across New Zealand's dairy sector. His methodology, which factors in inflation and national dairy herd size, has been peer reviewed and is expected to be accepted for publication in the New Zealand Journal of Agricultural Research shortly.

"The figure took us all by surprise. It will be the first published post-release weed biocontrol agent economic analysis for New Zealand and we think it shows in a very tangible way how smart science can assist the primary sector."

Ragwort, which invades pastoral land and is toxic to cattle and horses, is thought to still cost New Zealand dairy farmers $20 million per year in control costs.

The flea beetle has wiped out ragwort on 50 per cent of New Zealand farms, however, it remains a “moderate” problem on about a quarter and the remaining farms – many in wet regions located on the West Coast, Taranaki and Northland - are still fighting the weed. A second insect, a plume moth that thrives in wet conditions, is being deployed to tackle remaining ragwort strongholds and looks set to reduce the threat of ragwort further.

Ragwort flea beetle was shortlisted in New Zealand as a potential control agent in the 1930s but dismissed. Fowler said that “decision had no scientific basis. I did some calculations on the cost of that decision and it came to a staggering 8 billion dollars. That’s how much farmers spent on controlling Ragwort up until 1983, when the DSIR imported and released the flea beetle.”

The latest flea beetle research was funded by the Ministry of Business, Innovation and Employment as part of Landcare Research's Beating Weeds Programme.

“Farmers can get on a continual treadmill of spraying herbicides to control the weed but that doesn’t give the flea beetle a chance, and only provides temporary relief. It takes a bit of nerve but sometimes they need to take a deep big breath and do nothing. Be patient and let the ragwort flea beetle do the work for you.

“Biocontrol agents are not always as successful and many fail to have any material effect. However, the flea beetle is a success story and our quantitative analysis shows how important these tools can be when we assess control agents. The $44 million saving is ongoing and free, and we can be confident that this little golden beetle will not do anything other than munch through this particular weed.”