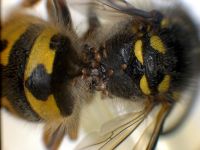 Researchers will shortly begin investigating a promising new biocontrol agent that could over time impact on European wasps.

Two species of European wasps, Vespula germanica and Vespula vugaris, are significant environmental and economic pests in New Zealand. The wasps have a direct effect on industries such as beekeeping (by raiding bee hives, robbing honey and preying on bees) and wine growing (through feeding on the grapes). Wasps also affect birdlife by eating honey dew and insects that native bird species rely on and of course, they also pose a serious health and safety hazard.

Pest wasps are widespread throughout the country and in some areas nest densities can reach 30 nests/ha, with many thousands of wasps per nest.

During a recent study on the chemical ecology of European wasps researcher Bob Brown serendipitously discovered mites on the wasps. The mites appeared to attach to wasps with their mouthparts and were located in areas difficult for the wasps to groom. Wing deformation was apparent in infected wasps, and heavily infected wasp colonies collapsed.

“These finding encouraged us to reinvestigate a biocontrol programme for wasps in New Zealand, and pursue this potentially promising mite-agent,” says Landcare Research scientist Ronny Groenteman.

A community-led group was formed and was this week received Sustainable Farming Fund (SFF) support to start the research project.

Ronny says the first step of the project is to identify why the mite is not already providing biocontrol and develop methods to ensure it can. Several possibilities will be investigated:

Further steps will ensure the mite is damaging to both the German and the common wasps, and that it is not going to pose risk to honeybees, bumblebees and native bees.

“If we find that the mite is not a good biocontrol candidate, this is equally valuable information and will allow further research to focus on identifying potential biocontrol solutions from the wasps’ native range,” Ronny says.

The wasp problem in New Zealand is now too large for a single control method to resolve. The methods currently available can provide temporary relief across small areas. Current methods are not suitable for providing ongoing control of wasps across very large areas because they require repeat applications across difficult terrain.

Biocontrol is a highly desirable option for wasps because it is a long-term, self-sustaining and highly cost-effective solution, and because agents are active over large areas and in inaccessible terrains.

“Biocontrol agents aren’t a ‘quick fix’ but instead work quietly over a number of years in conjunction with other existing control methods. While biocontrol agents introduced to New Zealand 30 years ago failed to control wasps, this mite could be playing a different game, and it is already here and established. We are convinced that investigating its potential is the prudent thing to do,” Ronny says.

Chairman of the Vespula Biocontrol Action Group, Bryce Buckland, is optimistic about the project.

“We all know how much of an economic and environmental problem wasps are. While we’re not yet sure if the mite can be successfully transferred to the common wasp, recent high profile wasp attacks on members of the public indicate how important this research really is. It’s certainly a promising lead that we’d be prudent to chase.

“However, it’s important to reiterate that this is very early stages of a research project and if serious scientific, health or environmental issues arise making the project unworthwhile then it will cease.”