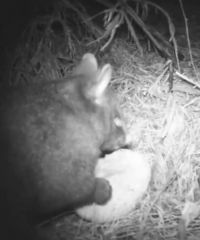 A possum captured eating fungi essential to the growth of wilding pines.

New research has found pests may be assisting the spread of wilding pines which have invaded more than 1.5 million hectares in New Zealand.

Motion-sensitive cameras set up in the Canterbury foothills by Landcare Research scientists captured deer and possums eating fungi essential to the growth of the pines.

Landcare Research scientist Jamie Wood, who led the study recently published in the Journal of Ecology, said DNA analyses of the dung from the animals showed they contained traces of the fungi.

“Our results suggest that the pests may be helping wilding pines spread to new areas by dispersing the beneficial fungi through their faeces,” Wood said.

“Other studies have shown that when a pine seed lands on soil, it can only establish if the fungi are present too.  So if you get rid of the fungi pine can’t invade,” he said.

The fungi provide several benefits to the pines including increased access to nutrients and drought tolerance. Once in the soil, the fungal spores can lay dormant for decades.

While the study focused on deer and possum consuming and dispersing the fungi, it was likely other exotic mammals such as pigs and hedgehogs could also do the same, Wood said.

He described the interaction between the pests, fungi and pines as an “invasional meltdown”.

“A meltdown is when multiple things come in – so in this case pines, fungi and mammals - and they’re all beneficial to each other and help each other spread. But if you take one of those things out they don’t do so well.”

Co-author Duane Peltzer of Landcare Research said the findings suggested pest control, in conjunction with traditional methods, could slow the spread of wilding pines. Currently the invasive trees are cut down or sprayed with herbicides.

“Management aimed at slowing or containing invasive trees might be more successful if animals are controlled at the same time. Although this idea was not tested here, there is an intriguing possibility that managing animal invaders concurrently with invasive trees might slow the spread or allow containment of wilding pines,” Peltzer said.

Wilding pines are a problem primarily in the Marlborough Sounds, the South Island high country and central plateau of the North Island, but are also invading natural habitats in Otago. The areas impacted are remote and difficult to access making control dangerous and costly. As a result, each year public agencies and farmers spend millions of dollars trying to control the spread which is vital to preserving native flora and fauna.