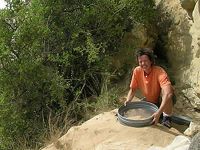 Janet Wilmshurst is this year’s recipient of the prestigious 2013 Te Tohu Taiao Award from the NZ Ecological Society.

She has made major contributions to technique development, to our understanding of New Zealand environmental change over the past 18 000 years, and has resolved long-standing controversies surrounding the settlement of New Zealand and the Pacific.

As well, she has applied this expertise to practical ecological problems such as restoration of indigenous ecosystems. In all these ways, she has made an intellectual contribution that has widespread implications within New Zealand and overseas.

About the Te Tohu Taiao Award for Ecological Excellence

The Te Tohu Taiao award (formerly NZES award) is presented annually to recognise individuals who have made an outstanding contribution to the study and application of ecological science. The award is made to the person(s) who have published the best original research in ecology of New Zealand, and its dependencies (including the Ross Dependency) or person(s) who have made the most outstanding contribution to applied ecology particularly conservation and management.