The New Zealand environment began to be modified upon arrival of the first settlers. Even relatively small populations of people cause detectable impacts on previously uninhabited ecosystems and the colonisation of New Zealand was no exception. Like many island archipelagos in the Pacific, New Zealand was particularly sensitive to human settlement. Its unique plants and animals had remained isolated for many millennia and were unprepared for the arrival of people and their introduced mammalian predators.

Shortly after settlement in the 13th century, the original closed forest cover of New Zealand was reduced by nearly 40% in one of the most rapid and complete landscape transformations anywhere in the world. Paradoxically, the extent of forest loss shows no clear relationship with population density; many sparsely inhabited regions were more severely affected than those densely settled. In our work we address the issue of how this deforested landscape was achieved and maintained, and why. Some of the key questions are: Was landscape burning a frequent, purposeful activity designed to maintain an open vegetation cover? Or were some regions too vulnerable to accidental, occasional fire to remain in forest?

The question of exactly when the first people arrived in New Zealand is hotly debated. Māori have a rich oral history covering the origins of their people; one that is deeply entwined with nature, incorporating mountains, oceans, rivers, plants and animals along with more mythical elements, and handed down through the generations. The whakapapa of most iwi place the arrival of their ancestral canoes to New Zealand back to ad 1325-1400, representing about 24-27 generations of Māori (assuming 25 years per generation). Although the extensive amount of earliest dated archaeological evidence and records for deforestation agree well with this time, there are alternative traditions and evidence that suggest other people were present in New Zealand for a long time before Maori settlers arrived, but they apparently left no evidence of their presence on the environment. Such a scenario is unlikely on any small island in the world, but our research in this area is trying to answer some of these controversial debates.

What research is needed?

We need to reconstruct the details surrounding the earliest settlement impacts, and to establish the precise timing of this event, in order to fully understand the transformation of the New Zealand biota following the arrival of people and their introduced predators. Reconstructing the prehuman vegetation state of an area is also useful to help guide vegetation restoration plans, and understand the dynamics and future potential of remaining forested fragments. Our work also looks at the impacts on wetland vegetation as well as forested areas, as these vulnerable ecosystems, although seemingly unchanged since human arrival because they are still dominated by native biota, underwent vast changes too.

Our main tools of analysis include reconstructing past vegetation changes using pollen analysis; reconstructing past fire histories using charcoal analysis; and radiocarbon dating sub-fossil rat-gnawed seeds to pinpoint the arrival of the first introduced mammalian predator, the kiore or Pacific rat (Rattus exulans). Current investigations into human impacts are underway from sites as far south as the subantarctic islands to islands off the coast of Northland. 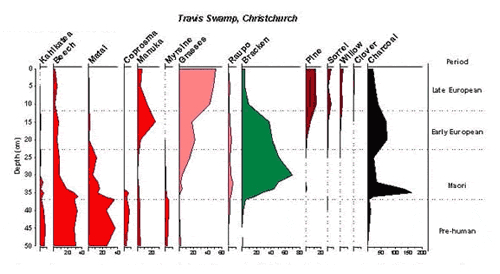 How will this information be used?

Refining the chronology of New Zealand's prehistory will expand our understanding of current models of colonisation by people and commensals, and their ecological impacts throughout the Pacific. Defining past states and responses to prehistoric environmental change will improve our understanding of remaining wetland and forest ecosystems and provide information to help guide their future management.