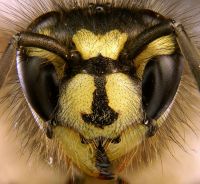 A community-based group has been formed in the Nelson region with the support of Landcare Research to investigate the feasibility of undertaking a new biocontrol programme aimed at attacking European wasps.

We intend to apply for a Sustainable Farming Fund (SFF) grant to study the safety and biocontrol potential of promising-looking mites that were recently discovered and that appear to attack wasps.

The community group was formed following the first of several meetings through New Zealand as our researchers talk to the community about promising new leads on wasp bio-controls.

During a recent study on chemical ecology of European wasps a researcher at the University of Auckland serendipitously discovered mites on the wasps. The mites appeared to attach to wasps with their mouthparts and were located in areas difficult for the wasps to groom. In addition, wing deformation was apparent in infected wasp nests, and heavily infected wasp colonies collapsed.

“These finding encouraged us to reinvestigate a biocontrol programme for wasps in New Zealand, and pursue this potentially promising mite-agent,” says Landcare Research scientist Ronny Groenteman.

“But, projects like this require public involvement and therefore we’re inviting members of the public, industry groups and other stakeholders to listen to our presentation and to be a part of our application.”

“Biocontrol agents aren’t a ‘quick fix’ but instead work quietly over a number of years in conjunction with other existing control methods. While wasp biocontrol agents introduced to New Zealand 30 years ago failed to establish, this mite could be playing a different game, and it is already here nd established. We are convinced that investing its potential is the prudent thing to do,” Ronny says.

Presentations will be held in several parts of the country over following months.