Rabbit calicivirus - the benign and the virulent 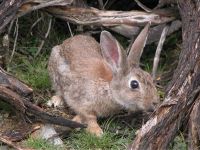 Janine Duckworth and colleagues are investigating the potential problems caused by benign calicivirus, a project associated with the Invasive Animals CRC

Overview of our participation in the  Invasive Animals CRC

In June 2011, Landcare Research became a Core Participant in the Invasive Animals Cooperative Research Centre (CRC), an AU$19.7M programme of research and extension activities spanning all aspects of the management of terrestrial and freshwater vertebrate pest species. By participation in the CRC, we are developing strategic links with Australian organisations and enhancing our research capability in three key areas: ecological modelling, biological control, and decision-making in pest management. Research activities target invasive species or generic problems of concern to both New Zealand and Australia. Benefits will accrue primarily towards addressing Outcome 1: Biodiversity and Outcome 4: Development within limits.

Research in the CRC got under way a year ago (July 2012) so it is timely to have a look at what is happening. Landcare Research has four projects on the go so in this and later posts, we’ll focus on each of these projects. The first one is a 5-year project led by Janine Duckworth (Lincoln) looking at non-pathogenic strains of RCV (rabbit calicivirus).

Janine’s team are bringing the latest diagnostic tools to Landcare Research, Lincoln, to confirm the existence and nature of benign rabbit caliciviruses in New Zealand. Benign caliciviruses are a potential problem because they can provide immunity to rabbits and reduce the impact of the closely related pathogenic virus, rabbit haemorrhagic disease virus (RHDV), that is used as biocontrol agent to control wild rabbit populations. Janine’s project will increase our understanding of the biology of benign RCVs, cast light on likely routes for infection and the pathogenicity of the virus; and will determine the degree of protection offered by benign RCVs against subsequent RHDV infection.

Armed with this sort of information, researchers will be better to predict the likely impact of RCVs on the effectiveness of RHDV-based rabbit biocontrol, particularly in temperate climates. This is of interest to rabbit managers in cooler temperate areas of Australia, such as Victoria and Tasmania, as well as throughout New Zealand.

Janine’s involvement in the CRC enabled Landcare Research to secure an aligned 3-year project funded through the New Zealand Sustainable Farming Fund. The goal of this ‘sister’ project is to identify high-virulence New Zealand-sourced strains of RHDV that would be useful as a biocontrol tool for rabbits in both New Zealand and Australia.

In the first year, Janine has focused on establishing sampling sites up and down the country, from the mid-central North Island to Southland, and on establishing collaborative links with the research team in CSIRO (Canberra) who are investigating the ‘Australian’ side of the equation.