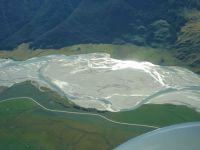 A braided river flows in multiple, mobile channels across a gravel floodplain, with evidence of recent channel migration within the active riverbed and of historical movement of the active bed across the floodplain (Gray & Harding 2007). Braided rivers carry high sediment loads. The channels repeatedly branch and rejoin creating an intervening pattern of low islands and shallow bars. Globally, braided rivers occur only in mountainous, glaciated areas where natural gravel production, river flows and gentle gradients allow them to form (Peat & Patrick 2001). The riverbed’s substrate is hard and there is little cover in terms of vegetation or litter, because of the dynamic character of the habitat. A bank-to-bank flood can be expected about every decade. As such, opportunistic and scavenging invertebrates often colonise these sites after flooding.

Braided rivers occur throughout the South Island, particularly on the eastern side, and south of the Buller in the west. In the North Island they occur mainly on both sides of the axial ranges from East Cape southwards.

Anon 2004. Forgotten Plants of the Shingle Riverbeds. Forest and Bird.

Cockayne L 1912. On the peopling by plants of the subalpine riverbed of the Rakaia (Southern Alps of New Zealand. Transactions of the Botanical Society of Edinburgh 24: 104-125.

Daly I 2004. Inventory of instream values for rivers & lakes of Canterbury New Zealand: A desktop review. Report U04/13 Environment Canterbury.

Williams PA, Wiser SK 2004. Determinants of regional and local patterns in the floras of braided riverbeds in New Zealand. Journal of Biogeography 31: 1355-1372.

Life on a braided river (Department on Conservation pamphlet)