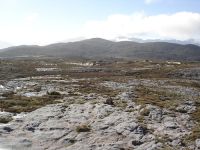 Erosion pavements are areas of flat to gentle slope that have been bared of any topsoil formed through chemical weathering, often from erosion of the topsoil or peat. They mostly have very little sand or gravel (as distinct from gravel fields or sand plains) and depending on the rock type, and they may or may not have large cracks and fissures that do not support gravel or colluvium. Ponding of rainwater may result in seepage areas supporting montane and subalpine bog species. Erosion pavements occur on ridges, mountain tops and plateaus rather than on tors or rock stacks. They do not include coastal turfs, even where these occur on coastal erosion pavements. Erosion pavements range in size from small inter-tussock spaces to patches many metres across. Plants are found almost exclusively in the cracks and range from herbs such as Celmisia dubia and Pentachondra pumila, grasses such as carpet grass (Chionochloa australis) to low shrubs, often of manuka (Leptospermum scoparium) or Dracophyllum spp. Examples of this system have previously been described as Chionochloa australis rockland (Nicol 2008).

Sandstone erosion pavements are known from the coal measures of the Denniston and Stockton Plateaus in Westland, Mt Davy on the Paparoa Range, and on the Herbert Range south of Garibaldi Ridge, North-west Nelson. They have probably increased in area at the first three of these four sites since human settlement, due to grazing and burning.

Because of their frequent association with coal measures, many of these ecosystems have been destroyed by, and continue to be threatened by, mining activities. Off-road vehicles can also be a problem.

Norton D. 1997. The hidden coal plateau of the Buller. Forest and Bird, May.