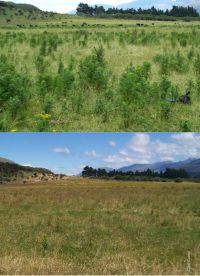 West Coast site, Makarora, where plume moths were released in January 2009 and showing a substantial reduction in ragwort 13 years later in January 2012.

Ragwort (Jacobaea vulgaris) belongs to the daisy family Asteraceae, and is widespread throughout New Zealand.

Like many of our pastoral weeds, ragwort was brought here accidentally in contaminated seed during the 1870s. The climatic conditions here suited ragwort “down to the ground” so it quickly became a serious weed. Ragwort protects itself from grazing animals by chemical compounds that damage the liver cells of stock, particularly cattle, deer and horses eventually causing death, although sheep can tolerate eating it to some extent. Controlling ragwort in New Zealand got off to a volatile start back in the 1930s when farmers used a chlorate chemical to spray the pasture. Farmer Buckley discovered that when the mixture came into contact with his woollen trousers the combination became explosive!

A number of options are available for controlling ragwort including better herbicides than were available in the 1930s but the timing has to be carefully managed and control can be very costly. Biological control of ragwort was first explored in the 1920s, and was one of the first biocontrol programmes to be implemented in New Zealand. Two seed-feeding flies (Botanophila jacobaeae and B. seneciella) were released between 1928 and 1939, but only B. jacobaeae established – in the central North Island. This fly has little impact on ragwort as it is unable to destroy enough seeds to make a difference. Cinnabar moth (Tyria jacobaeae) was first released between 1928 and 1932, but only established in the lower North Island. A mass-rearing programme in the late 1980s and early 1990s managed to increase the distribution of the moth and it now occurs patchily throughout the country. Although cinnabar moth appears to be limited by parasitism and predation, it still regularly manages some spectacular outbreaks in which large areas of ragwort can be defoliated. However, the major breakthrough in ragwort biocontrol was made with the widespread establishment of the ragwort flea beetle (Longitarsus jacobaeae) during the 1990s. Since then the ragwort flea beetle has significantly reduced ragwort populations throughout much of the country, and ragwort is under such effective control now in many places that often no other control measures are required. A study is currently underway to attempt to quantify how ragwort populations have changed in the last 20–25 years, by revisiting as many of the original ragwort flea beetle sites as possible.

However, as good as it is, the ragwort flea beetle has not been able to get on top of all ragwort populations, especially where people continue to use herbicides. While other parts of the country were reporting excellent results with the ragwort flea beetle, ragwort remained a stubborn problem on the West Coast of the South Island. About 15 years ago a group of farmers approached Hugh Gourlay about what could be done about this. With Hugh’s encouragement the farmers formed a group in 2001 called the West Coast Ragwort Control Trust (WCRCT) and sought funding from the then newly established Ministry of Agriculture and Forestry Sustainable Farming Fund (MAFSFF). The group was successful in gaining funding and the first project to be tackled was to find out what was going on with the ragwort flea beetle on the West Coast. This study found that conditions there were ideal for ragwort but not for the flea beetle. “On the West Coast, there is only one generation of fl ea beetle per year and it doesn’t seem to reach high enough densities to affect the ragwort populations. This is most likely related to the high soil moisture affecting immature stages of the beetle’s life cycle,” said Hugh. “Once rainfall gets to around 1700 mm per annum or higher, and if it results in waterlogging of soil at times when the larvae are developing, the ragwort flea beetle is not able to be an effective agent.”

Once we had confirmed that the ragwort flea beetle was widely established on the West Coast, but unable to do the job there, we researched other potential agents. In Australia two moths released for biocontrol of ragwort, with good results, looked promising. In particular the ragwort plume moth (Platyptilia isodactyla), which also lives on a related species marsh ragwort (Jacobaea aquatica), which as its name suggests grows in wetter areas, looked like an excellent candidate. The plume moth is native to Europe and was released in Australia in the late 1990s. The plume moth has 2–3 generations per year and can lay up to 100 eggs at one time. The larvae tunnel down into the crown and roots of ragwort rosettes and into the stalks of flowering plants completing their development as pupae inside curled leaves or in the soil surrounding the plant. Attack by as little as 2–3 larvae can kill ragwort plants. The crown-boring moth (Cochylis atricapitana), also from Europe, causes similar damage but is less effective at killing ragwort plants.

The WCRCT decided to look at importing both moths and, with Landcare Research’s help, succeeded in gaining approval from the Environmental Risk Management Authority in 2005 to release both species. But the Coasters didn’t stop there. They wanted to make the moths widely available to West Coast farmers. Although, the MAFSFF project ended in 2005 the WCRCT made a further application to the fund for money to employ a local person to rear and release the moths over the next few years. This money was granted to the trust and they employed Caryl Coates to rear moths and release and monitor them at selected sites. Caryl has reared at least 9000 moths for release and has 47 active sites from Westport through to Haast demonstrating both great dedication and tenacity. Unfortunately the crown-boring moth proved difficult to rear, both for Caryl and Landcare Research staff, and from the limited number of releases made appears to have failed to establish anywhere in New Zealand. However, the ragwort plume moth, as hoped, appears to love it on the Coast and has established at around 85% of sites where it has been released.

Caryl is still today rearing and releasing these moths on the West Coast for interested farmers and occasionally provides some on request to other parts of New Zealand too. She is also continuing to monitor the establishment success and impact of the moth on ragwort populations there. “The plume moth is showing positive results on ragwort control throughout the Coast. Some release sites have been active for 7 years now and are showing a significant reduction in the ragwort population. Farmers in this situation are only having to spot spray these areas now, instead of using a boom spray or even a helicopter,” said Caryl. During a recent survey Hugh also noticed that populations of the plume moth are becoming widespread on the Coast, and that ragwort is now far less common than during the pre-plume-moth surveys.

Good results with the plume moth are also being reported in other parts of New Zealand. Landcare Research is preparing an economic analysis to demonstrate how much money has been saved by the farming sector through using ragwort biocontrol agents instead of chemicals, and this is expected to run into many millions. “It is fantastic that we have been able to work with a community to solve a serious problem and that the WCRCT is still active so many years later,” said Hugh. “What started out as a community project has also provided a solution for many other regions where ragwort biocontrol also needed an extra boost. This project is a really good example of what a committed community can do and has provided exactly the kind of results that the Sustainable Farming Fund was set up to achieve.”