Scientists and land managers are hailing the success of a biocontrol agent that is finally winning the battle with a central North Island weed, heather (Calluna vulgaris). Recently retired Department of Conservation (DOC) scientist Harry Keys, who managed the project from the DOC side for 20 years, is thrilled to see the progress the beetle has now made against heather.

Recent years have been very significant for the long-running project. “It has been a surprisingly long and winding road to get to this point, but we finally have good things happening on quite a large scale,” said Simon Fowler, who has been overseeing the project.

Heather displaces native vegetation, outcompeting vulnerable threatened plant species, and disrupts military operations on army land. The problem was first recognised in the 1960s, and by the 1990s heather had become the most widespread weed in Tongariro National Park. Since then heather has continued to spread far beyond park boundaries and is now present in over 50,000 ha of the North Island’s Central Plateau. 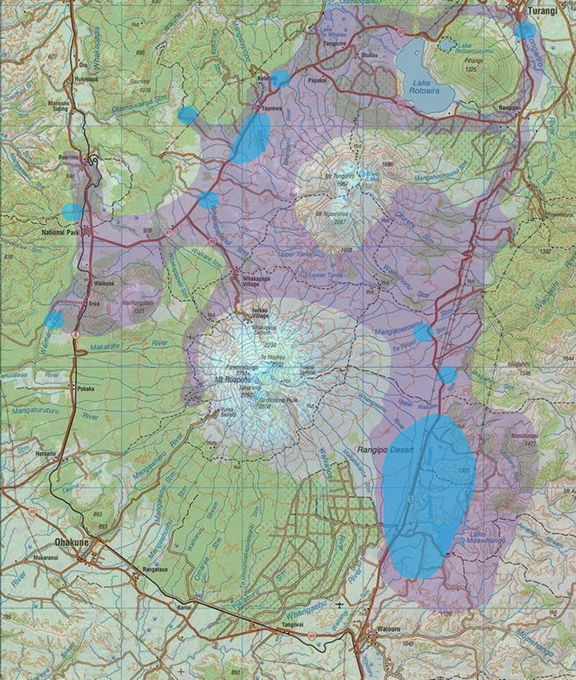 Until recently the overall impact of the heather beetles (Lochmaea suturalis), which were first released here in 1996,was less impressive than hoped, particularly at higher altitudes. The first beetle outbreak was detected at Te Piripiri in late 1999, leading to some optimism that it would not be long before we would see the sort of outbreaks that make this beetle a pest in its native range. But then the beetle populations struggled to repeat their early form until nearly 20 years after release, when large outbreaks started to form and gain momentum. The beetles have now damaged or killed heather over 5000 hectares (see map). “Every year the damaged area has been growing exponentially and the nett reduction of heather is now at landscape levels in some places,” said Paul Peterson, who regularly visits the sites.

In the outbreak areas the majority of heather plants have completely died, with only a small number of plants showing signs of regrowth. “Some of the questions we wish to explore now relate to the level of heather regrowth that will occur in the outbreak areas and the extent to which native plants will replace the heather,” said Simon. “We suspect that there will be changes in the soil nutrient loads as the heather dies and decomposes. This will initially favour exotic grasses, but as the nutrient ‘flush’ gradually declines, we would expect to find conditions more favourable to native plants,” added Simon. Already there is evidence that native plants such as Dracophyllum subulatum remainhealthy in areas once dominated by heather, and that the heather is being replaced by native tussocks within some of the permanent plots that are being used to assess changes over time.

Research to determine why the beetles were struggling initially showed that heather in Tongariro National Park is very low in nitrogen (a key component for insect growth) compared with heather in its native range in Europe. To try to kick-start beetle populations, fertiliser was used at some release sites with some success, but this was not feasible as a widespread approach.

It also became clear that the heather beetle population had suffered a genetic bottleneck in containment, when line rearing of individual females was necessary to remove a microsporidian disease. Studies showed that this had resulted in the New Zealand beetle population having a relatively small body size, which means fewer fat reserves and less ability to cope with cold weather. Post-release the beetles have especially struggled with the harsh climatic conditions at high altitude sites in the Park. Fresh stocks of larger-bodied beetles have been introduced from Scotland in an attempt to increase the average body size of the New Zealand beetles. It is too early to determine if this approach will be successful, but it also may no longer be needed. “The recent explosion of the original heather beetle population in the Central Plateau suggests that they have now managed to adapt to the conditions, including higher altitude areas,” explained Simon.

It is now clear that the project is finally starting to make significant gains for conservation in Tongariro National Park and the surrounding wetlands. “We expect that, in time, heather will become a minor component in the landscape of Tongariro National Park World Heritage Area,” said Paul. Other forms of control for widespread weeds such as heather, covering large remote areas, are not cost-effective, practical or sustainable. “We could not have achieved the results to date using control methods such as herbicide treatment without significant damage to native species,” Paul said.

This project is currently supported with funding from the Ministry of Business, Innovation and Employment as part of Manaaki Whenua – Landcare Research’s Beating Weeds programme.