Changes in garden bird populations over the last 10 years 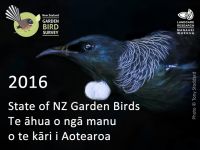 Landcare Research announced today that some species counted in the annual New Zealand Garden Bird Survey have declined over the last 10 years. The most spectacular decline has been for the silvereye, the most common native bird in our gardens, which has declined by 44% nationally.

The silvereye decline has occurred in all regions, but was greatest in Otago and Southland. Increasing winter temperatures over the last 10 years is one possible cause – fewer silvereyes were counted in gardens in mild winters than in cold ones. June 2016 was the second warmest, and silvereye numbers were the lowest recorded. “It is possible that in the mild winters more food was available in the surrounding countryside, so birds did not need to come into gardens in search of food as much as in cold winters”, said Eric Spurr, the NZ Garden Bird Survey organiser. In support of this, NZ Garden Bird Survey participants, particularly in Otago and Southland, have made comments on their survey returns such as, “No snow on the hills, no silvereyes in the garden”.

Six of the most common species in our gardens - all of which were introduced to New Zealand from Europe - have also declined. The declines were moderate (25–50% over 10 years) for starling, goldfinch, and song thrush, and shallow (10–25%) for chaffinch, dunnock, and blackbird. “It might be tempting to dismiss these declines as unimportant because the species of concern were all introduced to New Zealand from Europe. We would argue otherwise – these birds act as indicators for the health of the environment that we live in. The species in question all feed on ground-dwelling invertebrates, suggesting that changes in our urban landscapes such as increased use of paving are impacting these birds” said Catriona MacLeod, who leads Landcare Research’s Building Trustworthy Biodiversity Indicators programme.

The good news is tūī counts have increased by 14% nationally over the last 10 years. Spurr said, “this result is encouraging as it provides some early indications that habitat restoration efforts, such as predator control and re-planting native vegetation, in our urban and rural landscapes are starting to pay off. It also highlights the value of participating in the NZ Garden Bird Survey – the more people that take part the richer the picture we will be able to build about the health of the environment we live in.”

NIWA has predicted that temperatures this winter will be average to above average, and Spurr predicts that, as a consequence, silvereye numbers will again be low. He encourages members of the public to become ‘citizen scientists’ and help us find out by participating in the 2017 NZ Garden Bird Survey.

The 2017 NZ Garden Bird Survey takes place between 24 June and 2 July. Anyone who can identify birds in their garden can take part. All you need to do is select a garden, park, or school ground, look for birds for one hour, and for each species record the highest number seen (or heard) at one time. There is also a range of activities this year to get children and the young at heart excited about birds, including online quizzes, a colouring competition (win a Topflite bird feeder) and printable bird masks. To learn more, go to http://gardenbirdsurvey.landcareresearch.co.nz