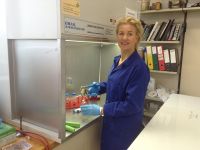 Figure 2. Rebecca Phillips uses sterile techniques in the laboratory to quantify chemical and biological production of N2O and N2.

A group of New Zealand and American scientists have discovered a new way of chemically converting reactive nitrogen common in soil before it turns into a harmful greenhouse gas.

The discovery, which will be published in the latest edition of the prestigious scientific journal Nature Scientific Reports [doi:10.1038/srep39077 (2016)], could lead to new alternatives for emission reductions from the New Zealand agricultural sector.

The team were the first to report organic N can react with inorganic N to create hybrid N2 (one organic N combined with one inorganic N) under standard conditions of temperature and pressure. Until now, it was thought this was only possible biologically.  N2 makes up 78% of our atmosphere and is considered a permanent sink for nitrogen. This exciting discovery could lead to new opportunities for mitigating excess reactive N in the environment.

Dr Phillips believes this research sets the stage for many practical applications. For example, further research could inform farmers of how to “cultivate soil organic matter useful for N management.”  Organic forms of soil N, such as exudates from plants and fungi, could function in the conversion of excess inorganic N that would otherwise be leached into water or emitted as N2O into a form that isn’t harmful to the environment. However, more research is needed to test exactly which forms of organic nitrogen are most effective.

The international team, which included Professor Craig Tobias (University of Connecticut) and Bongkeun Song (Virginia Institute of Marine Sciences), recently presented their findings at the Annual Project Directors Meeting in Washington DC., sponsored by the USDA National Institute of Food and Agriculture (NIFA) and the National Integrated Water Quality Program.

The discovery was a great example of international cooperation. The only analytical instrument capable of measuring atmospheric concentrations of both N2 and N2O in New Zealand is located at Landcare Research in Palmerston North. This equipment helps new advancements in the field of soil N cycling in New Zealand that were not possible previously. Analytical instruments at the University of Connecticut, tuned to detect isotopes of N2, utilised microbiological protocols developed by the New Zealand team and provided independent data. An international team effort was then able to distinguish chemical formation of hybrid N2 as completely independent of N2O production - a finding that has not been reported until now.

The team is now developing proposals for further funding that will allow them to investigate on-farm applications for transforming excess N from soil and water into unreactive atmospheric N2 gas without producing N2O.  This may allow scientists to develop options to manage the fate of agricultural N while avoiding greenhouse gas emissions.