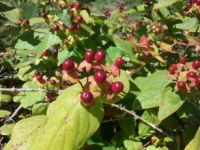 A moth and a beetle, imported from Georgia, Eurasia, have tutsan (Hypericum androsaemum) in their sights. This weed is thriving in parts of the central North Island, where it costs an estimated $400 per hectare per year to control. The first public release of the beetle and moth was staged near Taumarunui on February 15.Landcare Research’s Hugh Gourlay said the successful release was the culmination of nearly a decade of hard work.

“Tutsan is a threat to farmers’ livelihood and because of this they themselves have turned to science for a solution by forming TAG [Tutsan Action Group], a group of farmers who have dipped into their own pockets and joined forces with the likes of us, Landcare Research, Horizons Regional Council and the Sustainable Farming Fund, to come up with a solution.”

Landcare Research has established a world-class reputation in the field of biocontrol, saving New Zealand farmers millions of dollars.  Biocontrol offers a cost-effective, environmentally friendly and permanent solution to weed control. Carefully selected biocontrol agents target only weeds, don’t harm desirable plants and don’t pollute the environment. Once established, they travel wherever the weed is present and wherever it spreads, and can return again and again to kill off new weed growth – all without human input.

Gourlay is optimistic the foliage-eating beetle (Chrysolina abchasica) and the fruit, leaf and stem-feeding moth (Lathronympha strigana) will be as effective as other recent success stories, such as the ragwort flea beetle and St John’s wort beetle. The latest two insects were approved for release by the Environmental Protection Authority in May, 2016, after an application was made by TAG.

Gourlay adds, “A rust (Melampsora hypericorum) was self-introduced into New Zealand several decades ago and controlled tutsan throughout the country, but the weed, for a variety of reasons, has taken off in recent years and we hope that by introducing some help in the form of these two new agents we can get this problem under control again.”

Gourlay located both bugs in the former Soviet republic of Georgia in 2014 and brought them back into New Zealand, where he has reared them in Landcare Research’s state-of-the-art containment facility in Lincoln, which now hosts an insect population big enough to support releases of the moth and beetle into areas where the weed is flourishing.Tutsan exists all over New Zealand but is a significant problem in parts of the central North Island, where it forms extensive patches that threaten agricultural, forestry and conservation land.

Unpalatable to stock, hard to kill and shade-tolerant, tutsan is particularly prevalent in areas where the land has been disturbed by the likes of forestry. It is easily spread by birds, mowers, machinery, and soil and water movement. Common seed sources include roadsides, conservation and wasteland, old gardens and forestry.